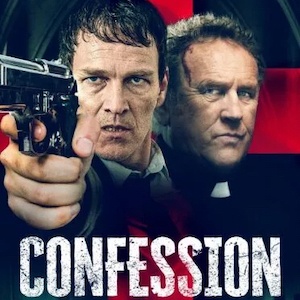 I did have to check my CV to make sure that I hadn’t, somehow, ended up as the publicist for Stephen Moyer! It only seemed five minutes ago that I was watching him in Krays: Code Of Silence and here he is again in Confession! Fortunately, as with his turn as Nipper Reed, watching him isn’t an arduous task.

What also helps is that this is, essentially, a two-hander, and the other hand is the wonderful Colm Meaney. When I was given the link I was warned by Editor in Chief Jilly that she didn’t know if this was like other films where a big name from the world of Star Trek/Wars/Gate was “starring,” but then they actually only put in a cameo appearance — but there was no need to worry!


Perhaps what helps, for me, is that while I do remember Colm Meaney as Chief O’Brien from Star Trek: The Next Generation and Deep Space Nine, I also remember him from loads of other things too; Mr Rabbitte in The Commitments being one of the earliest. It was only last week that I treated myself to a copy of Pixie and enjoyed him as Dermot O’Brien; thirty years apart, but the same high standard.

Bless Me, Father, For I Have Sinned

Confession is, apparently, a real-time drama set in a church. Apparently, that just means it lasts for just under an hour and a half, and that’s also how long the events portrayed take to play out. Personally, I don’t really see the point; unless it’s speeded up or slowed down, most scenes happen in real-time apart from when there’s a card popping up saying “Five Years Later” or suchlike.

The action takes place inside a church which is, apparently, supposed to be in the USA rather than Stowmarket where it was actually shot; at one point someone flashes a Massachusetts ID. To be honest, I think that there are two main reasons why these films are moved across the Atlantic; 1, to explain the amount of guns and gunshot wounds, and, 2, to explain why nobody ever wants to go to A&E.

So Father Peter (Meaney) is locking up his church for the night when in bursts Victor Strong (Moyer). He’s waving a gun and leaking from an abdominal gunshot wound. While they are faffing around locking up and dressing wounds we get a few peaks at Willow (Claire-Hope Ashitey). She is inside the church unbeknownst to the two men and also carrying a gun and a gunshot wound.

And Which Side Are You On Again?

There next follows all the ups and downs, which I can’t really say too much about due to spoilers. But there’s a lot of intrigue regarding who is the good person, who is the bad person, and how both men have ruined their respective family lives by decisions they made and now regret.

Confession is a beautifully acted piece. The main cast is spellbinding. I’ve known that about Colm Meaney during this century (and the tail end of the last).

Stephen Moyer has just started popping up on my radar despite a rich and varied career. I’ll be keeping an eye out for his future roles.