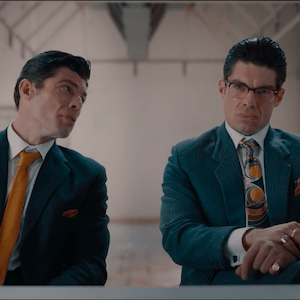 Krays: Code Of Silence is another look at the story of the, rightly, notorious Kray twins, Ronnie and Reggie. That might sound a bit like a “ho hum, here we go again” introduction but, trust me, it’s not meant like that. Some stories bear repeating, Robin Hood is an obvious one, and I’ve written previously about how many times A Christmas Carol has been adapted and if another one was made I’d still go and see it. The same is true about films based on the story of the Krays… well, this is the fifth one explicitly about them, so Reggie and Ronnie are still a long way behind Ebenezer Scrooge!

A brief recap for the few people who are unaware of the Krays… Ronnie and Reggie were identical twins born on the 24th October 1933. Their life stories sound like so many stereotypical tales of the period. Evacuated during the war they sought refuge in boxing and, spurring each other on, had some success. However, National Service was still ongoing and they were both called up to the Royal Fusiliers. Neither of the twins fancied this idea much and, literally, within minutes of arriving they assaulted the corporal in charge and went AWOL. They were caught and returned to the army, went AWOL again and this got them actually locked up in the Tower Of London.


Me And My Brother, We’re Gonna Rule London

All of those shenanigans, if that’s an appropriate term for criminal records and a dishonourable discharge, put paid to their boxing careers and so they turned to a full time life of crime. They rose up through the ranks of the criminal fraternity and, along the way, acquired a night club called Esmeralda’s Barn and that added a veneer of charm, celebrity, and credibility. They were a part of the Swinging London scene having portraits taken by David Bailey and seen about town with lords, MPs, and celebrities like Frank Sinatra, Peter Sellers, Judy Garland, Liza Minnelli, and George Raft.

Ronnie was, probably, the more unhinged of the two. He was also playing fast and loose with the laws regarding homosexual activity; he variously claimed to be bisexual and gay at different points of his life. He’s also the one usually seen wearing spectacles.  Those give us the usual clues needed to tell the two of them apart. But saying that Reggie was the more hinged is rather like saying that he was the better of a bad lot… a very bad lot indeed. He was marginally more under control than his sibling but that’s not really saying a lot. Reggie killed Jack “The Hat” McVitie, Ronnie killed George Cornell; neither were completely innocent.

So much for the ‘dark side’… there is another real life character portrayed who is deserving of some more film portrayals: Detective Chief Superintendent Leonard “Nipper” Read QPM. Read lost his mother aged four and spent time living with a succession of family members. He did well at school and he, also, became a medal winning boxer; boxing was where he earned the nickname “Nipper”. During his time in the police he was involved with The Great Train Robbery and only one murder case under his control remained unsolved when he retired. Sadly he died of COVID-19 in April 2020.

Behind Every Successful Fortune There Is A Crime

So much for the history lesson, how does Krays: Code Of Silence stand up? Very well, I thought! They used the one person playing both twins route that we saw in Legend; but here we have Ronan Summers standing in for Tom Hardy. Effects have moved on, even since 2015, and seeing the same actor on the screen as two different characters is no longer a big deal. Just as well that Mr Summers manages to show us that the two characters are, indeed, two different characters and I don’t mean just by wearing spectacles and camp ties to show us Ronnie! But the rest of the cast do equally sterling service as well. Stephen Moyer is excellent as Nipper Reed while Michael Higgs was delightfully obnoxious as the officious Du Rose… he did keep you wondering just how far into Scotland Yard the Kray’s influence went.

So was everything with Krays: Code Of Silence all fine and dandy? Not quite, but nothing was really enough to spoil things. For instance, half way through there is a scan across the board with all the bits and pieces of evidence pinned on it. Two pieces show the sentencing remarks following guilty verdicts; one for Ronnie for murdering George Cornell and another for Reggie for Jack McVittie (sic). To be honest though, that was more confusing rather than spoiling the surprise and I had the advantage of being able to do a double take with the pause button to check which is something you couldn’t do in the cinema. What I did think was that I could see this only needing a few tweaks to turn it into a very tense and suspenseful theatrical production. Throw lots more money at director Ben Mole and writer Luke Bailey and let’s see what results you get!