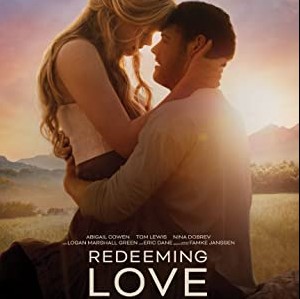 I went into this thinking it would just be work and that I’d watch Spider-Man: No Way Home again afterward for my reward.

To my great surprise and pleasure, Redeeming Love is a wonderful film about the Wild West, the Gold Rush, and women’s agency. It’s never boring, the characters are well-drawn and acted, the costumes are perfection, and the story is engaging throughout. There’s charming humor and real chemistry between both leads. The scenery: fabulous. I want to live on that ranch! Why Angel kept running away from it is hard to imagine.


If you remember LadyHawke from 1985, you’ll smile with nostalgia when Michael has his running chats with the Lord. I laughed a few times. It also was refreshing to see Angel refuse to bow down to human awfulness, and being willing to stay true to herself and help others. In spite of what she was forced to do to survive, she was a testament to resourcefulness and grit.

Some scenes are extremely difficult to watch. The subject themes are mature and this is not a story to subject young children to. There’s prostitution, sexual abuse, child abuse, pedophilia, beatings, drunkenness, muggings, intense grief, sickness, death, murder, and rough living. Women are presented with little to no agency, and the milieu verges on hopelessness several times. Some shots cut away from the ugliness, and in some, the camera lingers on people as they die.

It’s hard to believe me when I say it’s a sweet, nice little movie somehow that also includes terrible scenes of abuse against women and little girls. Kudos to everyone involved to make a positive statement that’s satisfying in the end. And they manage this without beating anyone over the head with the Bible. God is simply all-around — in a sunrise, a quiet moment in a peaceful church, in a swimming dream, and in a triumphant moment of self-expression when everything seems most tragic. The happy ending feels earned.

Is Redeeming Love Worth Seeing in the Theater?

I never expected to give a movie like this an A, much less applaud at the end! I heard a lot of sniffling as people shuffled out, and it wasn’t due to the pandemic. If you’re going to see this Redeeming Love, I recommend it on the big screen to get the most out of the setting and the experience. Bring tissues.

About The Peetimes: There are extras during the end credits of Redeeming Love. There’s a couple of memorial tributes after the first 2 minutes, as well as a number to call for abused women. Nothing else after that. The credits run for approximately 8 minutes.

There are no extra scenes during, or after, the end credits of Redeeming Love. (What we mean by Anything Extra.)

Plot
Based on the bestselling novel by Francine Rivers, REDEEMING LOVE is a powerful story of relentless love and perseverance as a young couple’s relationship clashes with the harsh realities of the California Gold Rush of 1850. It is a life-changing story of the power of unconditional and all-consuming love. Coming to theaters January 21, 2022, REDEEMING LOVE shows there is no brokenness that love can’t heal.

chevron_left Indie Movie Review – Confession (2022)
Is there anything extra during the end credits of Redeeming Love? chevron_right