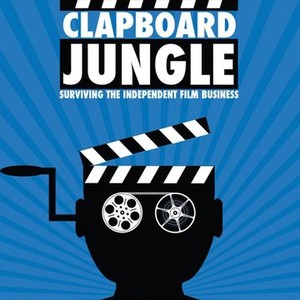 I’m assuming that, like me, you’ve seen more than your fair share of films. And, yes, I know that when you start assuming you make an ass of you and ming… or something like that. I find that there are times when a film may be less than fully captivating and your concentration might start to drift. You might end up thinking, “I wouldn’t have done that”, “I would have cut that scene”, or making any one of dozens of other seemingly obvious changes that would have ensured you have a sure fire hit on your hands.

Clapboard Jungle is a salutary warning that whatever you might be thinking while you’re sitting in the back row stuffing your face with popcorn, you’re almost definitely,  totally wrong. For instance, think of a story that you imagine would make a good film. Now start telling that story. Oh… you need to keep it going for at least an hour and a half. You need to know who will be inhabiting your story, what they’ll say, where they’ll go, and what they’ll do.  Congratulations! You’ve just scratched the surface of getting a film made.


Drama Is Life With The Dull Bits Cut Out – Hitchcock

Clapboard Jungle is a documentary that covers five years in the life and career of an independent filmmaker Justin McConnell. Justin has been working on and around films for twenty years, so it’s not like he’s some sort of armchair Tarantino. As well as being a director, writer, cinematographer, producer, and editor, he’s also worked in the sound department, as a musician, and as an actor.

His biggest dream, though, is to get one of his stories made into a film, get a showing, and a full release.

The five years covered in Clapboard Jungle is such a roller coaster ride. Justin has two or three different stories in the pipeline. Some are books that need translating into a screenplay, some are coming straight out of his skull. They all keep running into the same problem… convincing people to come up with the money to get everything up on the screen. Now I’m a bit old to be queueing up for hours to have insides shaken about, but this film gave me a very similar coaster sensation. I have to admit to being surprised as to how many times I was, by turns, elated and delighted.

I’m Dreaming For A Living – Spielberg

Now all this upping and downing isn’t just Mr McConnell over-egging the pudding. His tales of wow and woe are backed by a lot of interviews, with all manner of people from the movie business. Admittedly, quite a lot you won’t recognise unless you’re one of those people who sits and reads all of the end credits.

Having said that, there are some names you’ll definitely recognise. For instance, Michael Biehn… yes! Kyle Reese, amongst many others. Also there’s a fair bit from an up and coming Mexican writer and director called, checks notes, Guillermo del Toro! So, not a lot of unknown talking heads at all.

At the risk of getting spoilerish, Clapboard Jungle tends towards the fate of two films… Mark Of Kane and Lifechanger, the latter actually getting made, shown at a festival, and released. I had to find out on my own, because after being present at the pregnancy, during the labour, and at the delivery, I wanted to know how the little tyke got on. So I looked for it and found it! It’s available through Prime Video in the UK, and it’s really quite good! Especially as it features my favourite indie film star, Jack Foley, who hypnotised me throughout Fugue. I will definitely be looking out for Mark Of Kane getting released.