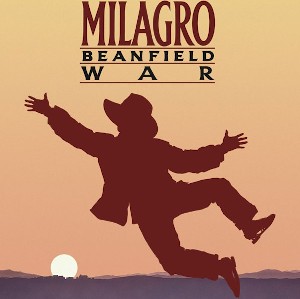 The Milagro Beanfield War is a movie everyone should see to be delighted, laugh a lot, cry a little, and have a two hour cinematic fiesta. It’s chock full of chemistry between almost everyone, in a cast that encompasses an entire town, from children to the elderly. In fact, it’s the elders who steal the show. (Plus one large pig.) I could literally watch two more hours of these people just sitting around, telling tall tales of El Brazo Onofre, and shouting at angels.

I’m a sci-fi geek, so when I say this little known and oft-overlooked drama is superb, I’m not messing around. There’s a sly element of fantasy, so maybe it’s not too far from my usual haunts. The appealing Oscar winning musical track elevates the mystery and magic threaded through the story.

Robert Redford directed/produced The Milagro Beanfield War, based on a charming (if rambling) novel of the same name. Here, Redford cut out the fat and kept all the grace notes, melding a story that’s decidedly not epic in any way…except to the inhabitants of Milagro, New Mexico. As Ruby Archuleta (Sonia Braga) says early on, “I knew Joe Mondragon couldn’t go through his entire life without attempting at least one great thing.”

His great thing? He ‘steals’ some water rushing freely by his father’s old dusty, barren beanfield. This water is illegal for anyone in Milagro to use, due to inequitable state water rights favoring rich developers. His one act of defiance in — mi Dios! — actually watering his tiny bean plot galvanizes the sleepy town in a way that’s basically a miracle.

It’s hard to watch this lovely film without tearing up — several times. A little from sadness, but mostly from joy.

It’s also timeless and timely, in spite of its 1980s heritage. Joe Mondragon’s wife says, “Why is it every time we’re mad at one of them, we end up hurting one of us?” The Milagro Beanfield War is entirely based on racial tensions. While the movie’s violence is played up for humor, the deep currents of hatred and despair are present and accounted for.

It’s a playful, feel good movie, though, full of heart and humor, superbly acted. I don’t think anyone could possibly dislike it. Another little milagro.

You also can’t help but root for Joe, who never asked to be a hero. Like Doctor Who novelist Justin Richards once noted, “Heroes can be found in the most unlikely places. Perhaps we all have it within us to do great things, but may simply lack the circumstances or the reasons to be heroic.”

The closing scene is note-perfect, with a dusky bookend to the daybreak opener. We’re also left with a small mystery as to what exactly is going on with a couple of characters, but I’ll just say I personally think it’s a Watership Down type of ending.

I wish I could say more, but I don’t want to spoil anything.

Just find and watch this beautiful movie and see if you aren’t as enchanted as New Mexico — ‘The Land of Enchantment’ — would have you be.

About The Peetimes: There’s a large cast in this film, making it challenging to find Peetimes that don’t introduce a new main character. I have a great Peetime halfway through that features 2 music montages and no dialog.

There are no extra scenes during, or after, the end credits of The Milagro Beanfield War. (What we mean by Anything Extra.)