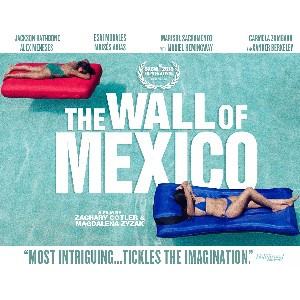 The Wall of Mexico is…hmmm… it’s too long to be a metaphor or a simile, not abstract enough to be an allegory, so it’s probably an analogy. “Of what” I hear you ask. Well, dear reader, the answer is in the title; The Wall of Mexico is about isolationist and anti-immigration policies, and some of the more extreme methods of dealing with them written by Zachery Cotier and co-directed by him and Magdalena Zyzak.

So, The Wall of Mexico starts with a shot of a strangely illuminated well, and then a cut to a wild party. The party is thrown by the Arista sisters: Tania (Marisol Sacramento) and Ximena (Carmela Zumbado), and is a wild drug and alcohol-fueled affair, except that the only thing that seems to be being consumed is well water… that’s water from the well, not me saying “it’s, well, water”.


Still, what Wall of Mexico really about?

We have a rich, spoiled family living on their ranch called ‘Mexico’. There is a bit of chat between the sisters when they talk about the ranch being called “Mecks-i-co” rather than “Meh-he-co”; “Meh-he-co” is a country a hundred miles south, while “Mecks-i-co” is an independent crypto micro nation surrounded by the USA.

The sisters spend their days sunbathing, drinking champagne, and trying to be a model and a photographer. They also spend their time alternately ignoring, teasing, and seducing the new, young groundskeeper Don (Jackson Rathbone) who is being trained by old hand, Mike (Xander Berkeley).

Please allow me a quick aside regarding Xander Berkeley

He is one of those people who you have seen in everything but he’s never the big star. He has, indeed, been in everything, both on TV (M*A*S*H, The Incredible Hulk, Hart To Hart, Cagney & Lacey, The X Files, 24) and in films (Terminator 2: Judgement Day, A Few Good Men, Apollo 13, Air Force One); the man defines ubiquity. The obvious reason being that he is good! Whether as a good guy or the deceiving traitor, he is always watchable.

There’s a MacGuffin at work

Anyway… back to The Wall of Mexico… the MacGuffin here is the well or, more precisely, the water that is drawn from it. While never specifically stated, it is implied that the water has powers including, but not limited to, curing cancer, a hallucinogen, stopping the ageing process, and an unusual taste. The Arista family make their money by selling the water to the nearby town, which has developed a mythology and superstitions of its own surrounding the well juice.

The sisters have frequent pseudo-intellectual, quasi-Marxist conversations which underline the need for allowing freedom of movement, and why it is better to build bridges than wall. Cultures need fresh blood, else they will devour themselves. They quote extreme left wing political dogma with all the fervor reserved for the extremely rich.

The mayor (a nice cameo from Mariel Hemingway) calls by with a group of protestors to tell Henry that his wall is anti-progressive, sends a message of superiority, and lacks common decency.

If you haven’t spotted which side the film makers are on by the end, the film finishes with some shots of the bits of another ‘protective’ wall which never quite made it. Unless you’ve been living under a rock for the last five years, the messages are fairly obvious but, somehow, manage not to smack you between the eyes every five minutes.

All in all, a well shot, well written, and well acted story about a… well.

chevron_left Indie Movie Review – Rialto
Stop me if you’ve heard this one: “Blockbuster movie gets a new release date” chevron_right