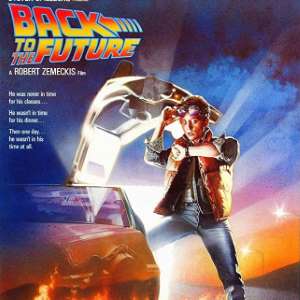 Back to the Future: Witty, exciting, memorable, perfectly cast, with sparkling chemistry, a fantastic score, and immensely quotable lines.

Well, gosh darn daddy-o, I should probably pen a heavier review…okay, if you insist…


There’s that word again, ‘heavy.’ Why are things so heavy in the future? Is there a problem with the Earth’s gravitational pull?

Some ground rules: This review is only about the original 1985 Back to the Future, not the sequels. Also, we’re just not going to dig on the bizarre and wonky time travel science. Just go with it. It’s more fun to believe there’s a Flux Capacitor in a DeLorean out there, running on plutonium and coffee grounds.

So, first off, for a mid-80s film, nothing actually looks dated. The only thing that seems a little weird now is Marty’s orange ‘life preserver’ vest. As someone in who went to high school in ’84, I can say that yes, we did wear those, and they were cool. But then our high fashions were completely tacky and in-your-face; Marty’s look was awfully mild.

I’m also going to give major kudos for Michael J. Fox and Christopher Lloyd for their superb inter-generational buddy movie vibe. They went all in to make their absurd premise real for us, the audience. We cared about them. We teared up over Doc Brown’s ‘death’, and cheered when we saw he’d read Marty’s letter after all. And didn’t you love it when George finally punched out Biff and won the heart of Lorraine? I rooted for those crazy kids.

The iconic clock tower finale is one of the best climaxes in the business…especially considering Back to the Future is a comedy. It’s exciting every time — the literal race against the clock — and Lloyd sells the hell out of it.

Fox is an adorably doofy straight man in the 1955 world. I always crack up during the Who’s On First soda shop scene. Fox was sweet and earnest as Marty. He rolled with the insanity, and we loved him for it.

Give me a Tab… I guess you have to remember Tab was a sugar free soda, popular in the day. Here’s the scene:

Just give me something without any sugar in it… 🙂

Each year at Comic Con, I see the same Marty and Doc duo on the streets, complete with hover board and souped up DeLorean.  I’ve seen their Flux Capacitor, and have the photos to prove it. If I can find said pics, I’ll add them here.

Unfortunately, there’s no room in the streets of San Diego during Comic Con to drive, so these guys can’t reenact the 88 miles per hour scene. (And there’s no Comic Con this year, pity, because there’s no way to have social distancing right now. Comic Con is a geek’s Mardi Gras nirvana.)

The soundtrack by Alan Silvestri is instantly recognizable, as is the songlist. Silvestri and Huey Lewis knocked it out of the park.

Much credit must also be given to Robert Zemeckis and Steven Spielberg, with Amblin Entertainment. Spielberg especially shaped the childhood of many mid-life adults today, in a happy, optimistic way. He’s not about the dystopian, dark, and gritty tales that characterize science fiction today.

There’s a beautiful sense of wide eyed wonder throughout Back to the Future. A charming hopefulness. We can have an adventure in another time, fix our present, and return to a better life. It might be silly and take Brobdingnagian scientific liberties, but it’s an adventure we’d go on.

Who doesn’t love this film? It’s the Power of Love, baby!

We now have Peetimes up for Back to the Future on the RunPee app. Just do a search for the movie title on the top right menu in the app. Do you agree with the Peetimes we chose?

About The Peetimes: This tight film moves quickly. It’s hysterical, has a lot of plot to cover, throws amazing quotable lines every few minutes, and never wastes “time”.

I would recommend the 2nd Peetime because it covers some exposition that gets covered in greater detail elsewhere in the film.

There are no extra scenes during, or after, the end credits of Back to the Future. (What we mean by Anything Extra)