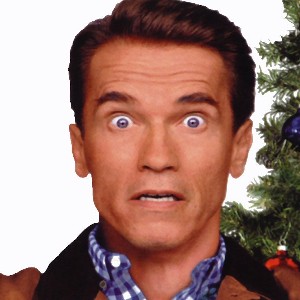 Jingle All The Way is, most definitely, a Christmas film. I know that’s obvious but, with all the “is it or isn’t it” arguments and articles doing the rounds, I thought I’d better make sure everyone’s aware that I’m aware what I’m talking about… for a change!

So what’s it about? In short, it’s about Howard Langston’s (Arnold Schwarzenegger) desperate search for the latest fad toy to give his son for Christmas. The big problem is that he’s one of those stereotypically hard working dads who forgets everything that isn’t to do with his job. And because he’s focused on his job to the exclusion of everything else, he hasn’t remembered to buy the Turbo Man action figure his son is obsessed with. Unfortunately, the rest of the demographic his son falls into is also obsessed by said doll, and so they have sold out ages ago. Here we are on Christmas Eve, and those action figures are like rocking horse droppings.

And fun and hilarity ensue… sort of. Jingle All The Way isn’t sure whether it wants to be a biting satire on commercialism and artificial demand raising, or just slapstick. Slapstick is probably the best way to go, given that Arnie always strikes me as looking like he’s halfway to being an animatronic puppet without any makeup.

The other things that leave satire way behind are the ludicrous set pieces on display. Fighting with a reindeer, comedy fights with a variety of Santas, a working superhero costume, and one of those comedy parcel bombs that just leaves your hair swept back and your face covered with soot, rather than looking like the sweeping up pile in a sausage factory.

But, perhaps, the biggest variance from our expectations is that there is no credence paid to the Austrian Oak’s physique. Yes, he’s a big guy (actually he’s the same height as me, but maybe not as well developed) but that is incidental to the story. He’s not a killing machine from the future, a specialist soldier, or a secret agent, or anything in that line. He’s just a salesman. I’m not sure if he’s a mattress specialist or just a general bed salesman but that’s it; nothing more, nothing less.

Tim Allen was considered for the lead and it probably would still have worked… you can’t say the same about The Terminator or Commando!

All in all though, Jingle All The Way tries its best to just be a family friendly, comedic romp. Some of the lines haven’t aged well and it’s less than a quarter of a century old! I can’t imagine a line like “I’m sweating like a dog in a Chinese restaurant” making it nowadays. There are ‘jokes’ along the lines of postal employees regularly carrying home made parcel bombs or using the fact that he’s a post must prove he’s insane.

There is a rabidly anti-gay vibe, with scenes which show him talking to a shop Santa offering him one of the dolls he has been so desperate to get, the one thing in the world that his son wants. That’s the son who is already disillusioned and disappointed with the father who has already let him down so frequently. The father who has proven, on many occasions, that he feels it is more important to sell another mattress to a total stranger than to spend time with his own son. So when the store Santa goes, “Psst, buddy, come here. Do you want a Turbo Man for Christmas?” what he should do is prostrate himself at his feet whilst crying with relief. Instead he sneers at him and says, “Forget it, I’m not going to sit on your lap,” which, incidentally wasn’t the offer being made, but a paranoid delusion.

Throw in the general air of ownership regarding his wife and things like the cookies she makes, and there is a definite feeling that we’re back in interbellum times, rather than approaching a new millennium.

Still, like a good face lift, a few snips and stitches would take years off it.