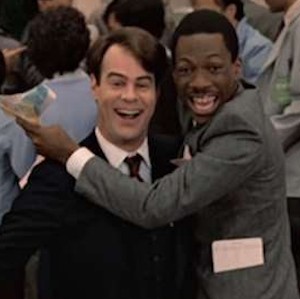 I’ve lost count of the number of times that I’ve watched Trading Places over the years, and not always as a Christmas film. It’s a comedy first and foremost, then it’s a social satire, and only then is it a holiday film.

For the sake of the half dozen or so people who haven’t seen it, Trading Places is the story of the unscrupulous, millionaire Duke brothers, Randolph (Ralph Bellamy) and Mortimer (Don Ameche). They have a long standing nature vs nurture dispute and decide to settle their scores with a wager. They will take one of their brightest and best — investments manager Louis Winthorpe III (Dan Aykroyd) — and ruin him socially and financially.


At the same time they will take a down and out off the streets Billy Ray Valentine (Eddie Murphy), and slot him into the recently vacated space in their social circle. They want to see if innate breeding holds sway and the two men revert to type, or their altered circumstances mean they end up following different paths. The stake for this bet is the princely sum of one dollar. Obviously, eventually, the good guys prevail and the bad guys get their comeuppance.

And She Stepped On The Ball

Mixed in with the four main characters are Coleman the butler (Denholm Elliott), soft hearted whore Ophelia (Jamie Lee Curtis), and corrupt security co-ordinator Clarence Beeks (Paul Gleason). Looking back, you’d think that this is a dream cast and there was no chance of it being anything other than a raging success. However, as is often the way, the original thinking was to have an almost entirely different cast.

Trading Places was originally conceived as a vehicle for Richard Prior and Gene Wilder, but Prior was dropped following his notorious freebasing accident and the project was reluctantly offered to stand up comedian Eddie Murphy. Reluctantly, because Murphy had only made one film, 48 Hours, and that hadn’t been released. So it was about to become a Wilder/Murphy vehicle, but Murphy had concerns about being seen as a replacement for Prior (not helped by the fact that 48 Hours was originally meant for Prior), and so pushed for Wilder to be removed.

I Was Poor And No One Liked Me

Director John Landis had worked with Dan Aykroyd on The Blues Brothers and suggested him, but the studio weren’t sure, as they saw him as part of a double act with John Belushi (who had not long ago died). In the end, Aykroyd took a pay cut to guarantee getting the role. Similarly, Jamie Lee Curtis was not the pick of the studio, as she had been working as a “scream queen” in Halloween, The Fog, Prom Night, Terror Train, etc.

Ray Milland was first pick for Mortimer Duke, but couldn’t pass a medical to get insurance. Don Ameche was second choice, even though he hadn’t made a film in thirteen years and John Landis thought he had died. John Gielgud and Ronnie Barker were approached to play Coleman before Denholm Elliott. Gielgud refused, because he had not long played a butler in Arthur. Ronnie Barker was considering retirement and refused to work more than seven miles from home. Even Beeks was lined up for G Gordon Liddy, but he pulled out when he saw what happened to the character at the end.

I suppose there are arguments as to why it’s not a Christmas film and could be set any time of year, but I do like to think of Trading Places as a Christmas film.  They certainly do in Italy, where the channel Italia 1 has shown it every Christmas Eve since 1997. Every year it gets over 10% of the audience.

Also there is now an Eddie Murphy Rule, which bars anyone from using secret inside information to gain an advantage on the stock market. Being pedantic though — as it was Randolph and Mortimer Duke trying to use the purloined papers to make money — I think it should be called the Duke Rule…

It’s hard to remember a time when Eddie Murphy was a newcomer. Back then, as this was his second film, Ralph Bellamy’s ninety-ninth, and Don Ameche’s forty ninth, he joked that between them they’d made one hundred and fifty films. He’s half way there on his own now and passed that number for TV appearances.

Trading Places is a New Year’s movie too…

As if being one of the biggest Christmas films doing the rounds, Trading Places also takes a greedy second bite of the cherry by having pivotal scenes taking place over the New Year. The train journey when the four accomplices meet up to swap the reports takes place on New Year’s Eve, and the delivery of the bogus report to the Dukes must take place on New Year’s Day as the trading floor denouement takes place on the 2nd of January.