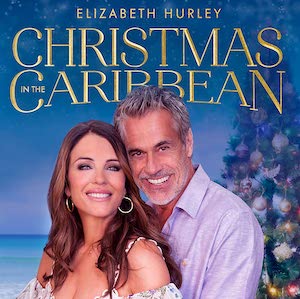 And so it rolls around again…Christmas! I can’t complain too much though; I’ve already seen three houses with their trees up and Asda have had mince pies on sale since September.  Hell’s teeth, hot cross buns are on sale! I know that a lot of people take the completion of Halloween as the starting pistol for Christmas but can’t we wait until the New Year for the Easter stuff to go on sale?

Maybe it’s because we don’t have Thanksgiving to act as buffer between the two, I don’t know. Anyway, Christmas is now under six weeks away so I guess I need to bow to the inevitable and start prepping my festive features. I do have a few in the pipeline but this is my first Christmas film of 2022. Will I be humming The Holly And The Ivy or will I be snarling “Bah, Humbug!”? Let’s see how Christmas In The Caribbean shapes up.


The Holly And The Palm Tree

So…what’s the story? Rachel (Elizabeth Hurley) is stood up at the altar by her fiancé Gregory (Ray Fearon). Obviously she is distraught and her mother (Stephanie Beacham) persuades her to go on her honeymoon with her two best friends Amanda (Caroline Quentin) and Rebecca (Nathalie Cox). How the luxury honeymoon on St Kitts for two is translated into a luxury holiday for three is never addressed.

As is, apparently, traditional in this sort of film, her friends decide that she needs to get back in the saddle as soon as possible and so try and get her paired off with the first available person with a pulse and a Y chromosome. From then on it follows the usual tropes; Rachel’s friends push Rachel and Alessandro (Edoardo Costa) closer together while Alessandro’s family…well, that would be telling!

It’s The Most Recycled Time Of The Year

To be honest though, there are very few surprises at any point throughout the hour and a half of Christmas In The Caribbean. Anti-spoiler habits that have been ingrained into me over the years will stop me from going into the details but if you’ve seen any rom-com Christmas film since Miracle On 34th Street then you’ll know, pretty much, how everything is going to turn out.

So, is it a bad film? No, not really. It is a bit formulaic but that is what you want around Christmas. Despite the total absence of snow, snowmen, reindeer, and icicles there is still a healthy dose of gemütlichkeit in the Caribbean sunshine. I was able to watch this with RunPee Jill and she described it as “like a Hallmark film but with proper actors” and I think that sums it up quite well. Nothing bad, nothing unusual, nothing disturbing. Unfortunately there’s also nothing original.