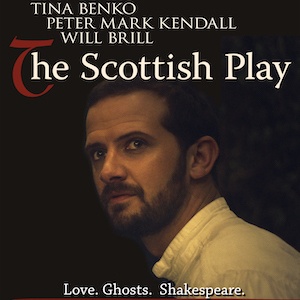 Let’s face it…films are supposed to be enjoyable. Well, that’s my opinion anyway. I haven’t done any real research but my guess is that most audiences tend to be fairly evenly divided by those who find Shakespeare enjoyable and those who don’t. Some were put off by having to learn it in school, some were turned on to it for the very same reason. Some people like it because they think they’re supposed to, and some grow into it.

The Scottish Play is, most definitely, enjoyable. It is engaging and charming in equal measure. There are big chunks delivered in iambic pentameter but using modern language so it flows nicely which gives a hint as to what the original audiences must have heard. In some ways it has the feel of a small scale, low budget offering. There are only a few small scale sets; a couple of bedrooms, a dining room, a conservatory, a small theatre, and a few street scenes. No huge sets, no CGI, no exotic costumes.


When Shall We Three Meet Again?

However, the money has been spent on the cast. Very often the films I get sent lead with “starring someone in the highest tier of the entertainment hierarchy” but they only do a two minute cameo. The rest of the film is spent going “who’s that?”, “were they in?”, or “isn’t that thingie from wossname?” Instead, The Scottish Play had people in it that I actually recognised…and they were in it throughout!

I was a big fan of Forever Knight back in the early nineties. I loved the daft idea of a vampire seeking redemption by being a police officer. But only being able to work the night shift because, well, vampire! Geraint Wyn Davies (Hugh/Macbeth) was Nick Knight. Peter Mark Kendall (Adam, the director) was in a couple of seasons of The Americans and had a part in Top Gun: Maverick. Throw in actors from things like Billions, Reacher, Orange Is The New Black, The Marvellous Mrs Maisel, and past and future MCU offerings and you can see that they spent the money on talent rather than sets.

In Thunder, Lightning, Or In Rain?

The Scottish Play is the story of a regional production of Macbeth.   Lady Macbeth is to be played by Sydney (Tina Benko) who is a big film star but wants to step away from the glare of her celebrity life style and big city life. While in rehearsals, Sydney finds herself being haunted by Shakespeare himself (Will Brill). The snag is that he wants to do some rewrites to Macbeth! Obviously, given the title, the famous curse is mentioned and does weave its way through the script. Unsurprisingly, as you can see in the trailer, a lot of the humour comes from that curse.

From then on we are on a gently paced comedy/drama. It doesn’t drag but neither do you have to keep rewinding to check what’s happening. It is an absolute delight. Is it perfect? No, but only because I tend to look for things to pick up on! There is a scene where Sydney stares at a statue of Shakespeare. The ghost of Bill looks like he was in his thirties rather than the what we’re used to seeing. Shakespeare wouldn’t have had an RP accent and would have been horrified by a female player. If that’s all I can find to complain about then it must have been an enjoyable couple of hours.