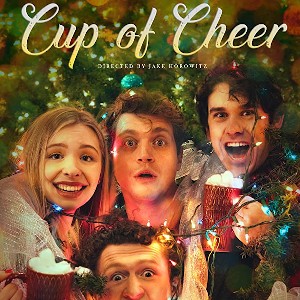 Cup Of Cheer is, allegedly, a comedy. There are moments of incongruity, surprise, repetition, inversion, exaggeration, and slapstick. There’s only one thing missing and that, sadly, is anything remotely funny.

It is supposed to be a parody of the archetypal, traditional Christmas film. Cup Of Cheer starts with a big city journalist, Mary (Storm Steenson) being sent to a small town, small by USA standards that is, to write a career defining article. On arrival there is the obligatory meet cute with the man, Chris Mass (Alexander Oliver) she immediately hates but, as the film rolls on, naturally falls in love with him and saves the day… that day being, of course, Christmas Eve.


So Far, So Formulaic

At this time of year you could walk down most streets, throw a stone, and hit a TV playing a — usually made for television — film following the same story arc. They tend to be ten a penny. My private theory as to why some people are so keen to class Die Hard as a Christmas film is just to shake up the trends and expectations.

So they load on the humour… at least, they attempt to. The trouble is they have obviously never heard of Mies van der Rohe’s epigram “Less Is More,” and they try relentlessly to be funny. The whole point of the elements of incongruity and surprise is that there has to be a plain, quiet background to stand out from, and Cup Of Cheer does not allow for that.  The rate at which jokes and situations are fired at you is relentless.

In some ways it could have been ideal for a younger, primary school child who is at the stage where something is funny when it is silly and repeating, and repeating similarly silly things just makes it funnier and funnier. Unfortunately they have ruled themselves out of that market by using strong language and adult situations.

So… Not A Children’s Film Then

While the language may not be at the same frequency of, say, The Gentlemen all of the words are used… yes, ALL of them. And then there is the quality of the jokes. They seemed to me to be the sort that might be written by a couple of third years from an all boys school. There are ones which were meant to be a double entendre but, sadly, one of the entendres went missing. For example – Mary, “Is that a candy cane in your pocket?” Chris, “No, it’s a huge boner.”

Honestly, this script makes Austin Powers look like Oscar Wilde, PG Wodehouse, and Noël Coward all rolled into one.

And then there are the situations. One brother gives another a lap dance but, as it’s Christmas he’s dressed as an elf.  One character has an intestinal problem causing him to constantly break wind. He is later seen passing diarrhoea into a urinal with graphically messy results. Following that there is a scene which could have made it into a Zucker, Abrahams, and Zucker film; a close shot on a pair of hands washing, and every time it cuts back to the sink there is an extra hand. That was quite amusing but really was lost amongst everything else.

They also managed to throw in an older woman who is made out to be a xenophobic, racist nymphomaniac, forever saying how “nice and white” people are, or excusing herself for a few minutes with a large sausage. I suppose with all that going on a joke like — Bar Customer: “Give me a virgin,” Barman “Virgin what?” Bar Customer “Blonde with a shaved asshole,” — just fits right in.

Was It All Bad?

To be honest, no. The camera work was good, the locations were nice, and the acting was surprisingly well done. The characters are all written with what appears to be heavy duty to industrial levels of stupidity, but the cast give their all and, at least, they don’t look like they are acting — however cringeworthy a scene may be.

My problem was that the main actors, Storm Steenson and Alexander Oliver, reminded me of two other personalities I quite like, Victoria Coren Mitchell and Robert Webb, and I couldn’t help but wonder how Cup Of Cheer might have turned out with them in the leads… and a script by Jane Goldman and Phoebe Waller-Bridge…