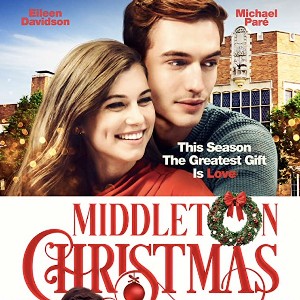 Middleton Christmas — or There’ll Always Be Christmas — as it’s sometimes now called is, I will be blunt, not my cup of tea. It might have appealed to my mother were she still alive, so maybe it’s a generational thing. She might have overlooked the things that irked me, but I found them too irritating to be able to ignore. Middleton Christmas is a saccharine soaked piece of nonsense that knows where every festive heartstring is and pulls on them remorselessly.

I’m not au fait with the American school system and their seeming devotion to all things sporting. Over here schools are mainly for academic studies. Games and athletics are for fun. If you’re any good at running around and throwing things, you go to the appropriate club at the weekend. There is a mandated session of P.E. for all school students. In the sixth form it was Wednesday afternoons, and my friends and I used to go ice skating at the Deeside Leisure Centre. We’d do half an hour’s skating, and then hit the bar for the rest of the afternoon; the barmaid was not much older than us and would happily serve us in exchange for getting chatted up by my mate.


So, apart from on TV or in a film, I’ve never seen a cheerleader, a quarterback, or a wide receiver

… Well, I may have seen one of the latter but not in a sporting context. I’ve also only ever experienced a stereotypical small town through a screen. I didn’t grow up where the streets and people were so clean, polished, and smiley.

Other things are different too. I don’t know much about the American education system but surely not all schools have to raise money to stay open; the whole existence of the school rests on the success of the Christmas concert. We have jumble sales and raffles to buy odd bits of kit, or to pay for trips, but the actual money to run the place comes from central government via the Local Education Authority. There are what we call public schools, but you’ll think of them as private schools and they get along by just charging a fortune to attend; a prep school starts at about £10,000 a year and a senior boarding school is nearer to the £40,000 mark… Eton is £14,167 per term.

What Time Is It Again?

The thing that perplexed me was when the story was set. At the beginning of the film the female lead, Samantha (Kennedy Tucker), pulls a Supersonic SC-3200 boom box out to dance to some Christmas music. Where does she pull it out from? My guess would be the late ‘80s — as she uses a cassette, and it isn’t mentioned about her being a nostalgia fan. Nowadays there are tiny little Bluetooth speakers that connect to your phone and can chuck out loads more volume.

So are we in the 1980s? Well, I don’t know enough about American trucks to tell what year they’re from, but I can recognise the Fiat 500 Abarth — which Samantha is driving — as being no more than ten years old at the most. Then the clincher comes about later in the film when they are talking about Instagram followers, so that definitely reins us back into the last decade. So maybe Samantha’s affectation for cassette based music tech is mere whimsey.

So It’s Rubbish Then?

In all honesty, no. It’s well shot and, mostly, competently acted. The cast seem well chosen, particularly the teenaged rivals Lucas (Trevor Stines) and Max (Michael Varde) who, along with the aforementioned Samantha (Kennedy Tucker), do actually look believable as people in their late teens.

The message is relentlessly cheerful and upbeat, even to the point of overlooking how serious the condition is that one of them gets into which causes all the mid story angst and final act redemption. Well… how serious and, at the same time, impossible… but that’s just me letting facts get in the way of a good story. A story which, whilst obviously being set at Christmas, manages to avoid mentioning religion — other than the compulsory praying for the person in a bad way.

So if you have a group of elderly relatives turning up over the holiday season, this will keep them entertained. Just throw in a tin of Quality Street and a party pack of Werther’s Originals, and you’ll be free to indulge in your depraved and degenerate activities for a good hour and a half.