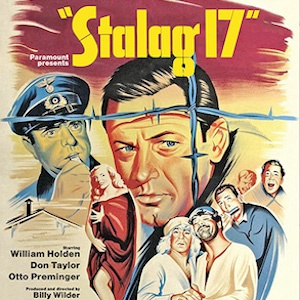 Now, before we get too far into this, let me make one thing clear. This is, most definitely, a film set at Christmas rather than a Christmas film. However, the remit was to include every film that has a Christmas tree, Christmas card, a red nosed reindeer, or mentions Christmas. Stalag 17 is set in the week before Christmas 1944. There are a few shots with Christmas trees as part of the mise en scène so it counts!

Stalag 17, as you’ll probably guess, is set in a PoW camp. While there is a bit of storyline devoted to escaping, the main theme is about uncovering which of the prisoners is a German spy. Escapes are thwarted, hidden supples are found, and secret tunnels are uncovered. Obviously, there has to be a mole and suspicion falls on Sefton (William Holden); he is the spiv who runs the, literal, rat racing, the still, the contraband, and bartering with the guards.

Funnily enough, as well as being a repeat collaboration between Billy Wilder and William Holden, Stalag 17 marked the end of Billy Wilder’s association with Paramount. One reason is that a Paramount executive suggested making the camp guards Polish so as not to upset the newly burgeoning West German market. Wilder had lost his parents in the concentration camps and was not in any mood to placate the people who had set them up. He demanded an apology from the executive; it didn’t come and he didn’t renew his contract with Paramount.

Another nail in Paramount’s coffin was the way they treated Wilder over payment for Stalag 17.  It was one of the biggest hits of Wilder’s career and he was expecting a decent payout. Unfortunately, the studio accountants decided that his last film (Ace In The Hole) had flopped. Consequently he owed them recompense for it. They subtracted what he “owed” from his profits. This didn’t go down well with Wilder and he didn’t re-sign. As a result Paramount lost out on The Seven Year Itch, The Spirit Of St Louis, Some Like It Hot, The Apartment and more!

Me And The Guy That Did Do It

Stalag 17 was nominated for three Oscars; Best Director, Best Actor, and Best Supporting Actor. Holden wasn’t convinced that his performance merited the Oscar he won; his wife thought it may have been compensation for him not winning for Sunset Blvd. He wasn’t the first choice though. Charlton Heston was going to play the part but didn’t like the unsympathetic nature of Sefton. Similarly, Kirk Douglas turned down the role. He had the good grace to say that was possibly the biggest mistake of his professional career.

Another thing that helped with the character responses was that the film was shot in chronological order. This is an unusual practice because that method is usually much more expensive and time-consuming. However it does give the opportunity for the cast to be kept out of the loop as far as twists and turns are concerned. How much this helps from the viewers point of view is hard to tell. What you actually ended up with is an intriguing mystery which throws a different light onto the old PoW trope.

chevron_left Is there anything extra during the end credits of The Fabelmans?
RunPee Weekly Newsletter #143 (December 7th, 2022) chevron_right