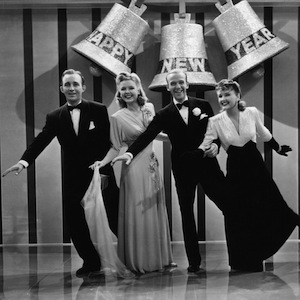 I’ll admit to being a bit confused by Holiday Inn. I intended to see the film with the song White Christmas in it and, obviously went for the one called White Christmas. Now I knew that Bing Crosby sang White Christmas but I was also fairly confident that Fred Astaire was in it. Oh…I love a bit of Fred Astaire!  So when there was no sign of him I did start to wonder.

A bit of nosing around later and I found out that the film I was thinking of was 1942’s Holiday Inn — both have Bing Crosby, both have songs by Irving Berlin, both are set during the holidays, but only one has Fred Astaire!


Now, anyone who’s actually spent time looking at the RunPee blog will know that we have a bit of a thing about trying to get complete lists; we enjoy ticking off the ones that are harder to find! We’ve got a bit of a thing going with holidays. This one will be on the Christmas list, and the other big one we’re proud of is our Groundhog Day list.

Holiday Inn is a film which celebrates all the major American holidays so it can also go on…ah, bugger. The one holiday it doesn’t seem to mention is Groundhog Day! Oh well, can’t win them all.

A Gentle Smile Often Breeds A Kick In The Pants

It’s Christmas Eve and Jim is preparing for his last performance, as he’s bought a farm in Connecticut and is planning on retiring there with Lila. Sadly for Jim, Lila has fallen in love with Ted and has no intention of going away. Jim still goes, leaving Ted and Lila as a double act. The following Christmas Eve, Jim comes back for a visit and announces his plans to turn the farm into an inn and entertainment facility that, for reasons that eluded me, only opens for the holidays…hence the title!

Throw in another performer, Linda Mason (Marjorie Reynolds), who is tricked into going to work at the Holiday Inn…and we’re ready to start the festivities.

There then follows a series of holiday events: Christmas, New Year, Lincoln’s Birthday, Valentine’s Day, Washington’s Birthday, Easter, Independence Day, Thanksgiving, and back around to Christmas. Exactly how Jim expects to make ends meet, let alone turn a profit, when he only has eight events a year. Admittedly, the events he does hold all seem to be sold out, but I do wonder what the ticket and bar prices must be like. Still, they do seem to be entertaining shows.

It’s Going To Be Easy, Like Peeling A Turtle

I suppose that the biggest problem with older films like Holiday Inn is that they tend to have different values from the present day. What is deemed to be acceptable changes with time and I like to think that society is improving because of that. Recent movements have shown that, despite the lip service paid to them, there is a long way to go before there is true equality.

There are, apparently, differently edited versions available now with the main difference being the woeful Lincoln’s Birthday scene…which has the performers in blackface. When the full version is shown it is with the disclaimer that it was made in a different time, and serves as a reminder of the racism and prejudice that was once considered acceptable.

Incidentally, a short clip of the Lincoln’s Birthday sequence is included in the trailer.

There are other things that were acceptable in 1942 which might be frowned upon now. These include things like the drunk dance that Astaire does. Fred Astaire had two shots of bourbon before the first take and one before each succeeding take. The take used in the final cut was seventh and last one to be shot. The whole gist of the film involves the two guys falling for and deciding to marry the same woman. Apparently though, she doesn’t seem to have a say in the matter.

Oh…the falling snow was made of chrysotile asbestos!