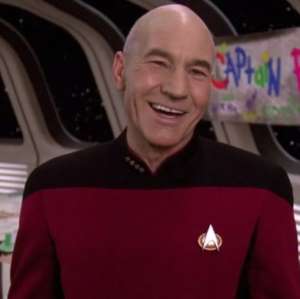 If you’re looking forward to a glass of Chateau Picard — red — or a cup of Earl Grey — hot — then you’re off to a great start, celebrating like they do on the Enterprise NCC1701-D. Captain Picard Day (June 16th by our calendar) was introduced to the viewers of Star Trek: The Next Generation in Season 7’s episode 12: “The Pegasus.”

While “The Pegasus” is really Riker’s episode and not Picard’s, it’s worth watching the beginning to catch Captain Picard Day in action. There’s a lot of arts and crafts involved: mostly drawings, paintings, and sculptings of Picard’s proudly bald dome. Feel free to boldly go make something. The episode has some goofy craft ideas.


What else can you do?

Here are the “Number One” Jean-Luc Picard episodes (and one movie) for your Captain Picard Day marathon:

These eps had to 1. focus primarily on the captain and 2. be great Next Generation episodes in their own right. (Which knocks mediocre Picard-centric offerings like “The Battle,” “Captain’s Holiday,” or “Rascals” from the stack.) Note — there will be TNG spoilers ahead.

On another note: I’m not including any episodes from the self-titled show Star Trek: Picard, for several reasons. 1. It’s ongoing and heavily serialized. 2. it’s all so depressing, and 3. from what I can see so far, nothing stands out as an inspiring episode worth endless rewatches. This is subject to change.

Season 2 (There’s nothing crucial in Season 1)

“The Measure of a Man” — Season 2, Episode  9: Easily among many people’s top five TNG stories, this courtroom drama cements the relationship between Picard and Data, showcasing Picard’s inherent optimism towards the Federation. Does Data have rights? Is he alive? Does he have a soul? This AI theme comes up often on Trek, with Data’s own offspring, several holodeck characters in TNG and Deep Space 9, and the Doctor on Voyager. It also re-surfaces as the plot set-up for Star Trek: Picard.

“Measure is a Man” is also the very first five-star Next Gen episode.

“Yesterday’s Enterprise” — Season 3, Episode 13: A good ensemble piece and one of the best Trek episodes ever, especially if you like multiple timeline stories.

“Best of Both Worlds, Part 2” — Season 4, Episode 1: Picard is a Borg. Enough said. I recommend viewing BOBW 1 and 2, but if you’re looking for a quick rewatch marathon, part 2 (plus “Family”) will do.

However, the BOWB cliffhanger at the end of Season 3 is one of the best ever conceived on any TV show at the time, still creating goosebumps now. “Mr. Worf, fire.”

“Family” — Season 4, Episode 2: This essential Picard episode can be seen as a coda to “The Best of Both Worlds”, or a trilogy if you include all three at once. While the movie Generations undoes a lot of the goodwill and fine character work engendered by “Family”, this is a must-watch, top-drawer look at who Jean-Luc is in relation to his family and childhood background.

“The Drumhead” — Season 4, Episode 21: With plenty of callbacks to Picard’s previous high-stakes adventures, this time he himself is on trial, in a witch-hunt of epic proportions. The Federation’s Seventh Guarantee is invoked. We must maintain constant vigilance, as Picard tells Worf: this message resonates no less today. One of the best Picard Speeches on the books.

“Darmok” — Season 5, Episode 2: Among the most intriguing and enjoyable high-concept outings, “Darmok” illustrates Trek’s ideals at their best, proving why Picard is the captain of Starfleet’s flagship.

“Disaster” — Season 5, Episode 5: We know Picard doesn’t like children, but here we see he can work with them if he treats them like bridge crew. Surprisingly, it works. It’s a nice show for him that’s touching without being sentimental. And otherwise, it’s a got that great disaster-movie trope where unusual pairings come together in fun ways. Worf mid-wifing Keiko’s baby is worth the price of admission alone. The finale scene where the children give Picard a handmade commemorative plaque shows how far Picard has come from the man who asked Commander Riker to be the “genial face’ of the Enterprise.

“The First Duty” Season 5, Episode 19: While ostensibly a Wesley Crusher show, “The First Duty” is a fine look at Picard from outside the view of the competent bridge crew he surrounds himself with. We see and hear exactly what Starfleet means to this career man, and strikes deeply into who Picard is as a character. It’s essential viewing, to the extent that the 2019 San Diego Comic-Con Picard pop-up museum was called The First Duty.

“The Inner Light” — Season 5, Episode 25: An all-Picard, all-the-time episode that’s luminous and appealing. What’s interesting is that the Nexus in the Trek movie Generations showing Picard with a family of his own is entirely unneeded. They did it so superbly here, first. “The Inner Light” is my favorite episode in all of Star Trek, and is so dependant on Patrick Stewart’s mad skills to pull off this effortlessly. A+++. (Bonus ep: “Lessons” — Season 6, Episode 19: A small, self-contained follow-up to one of the most enduring experiences in the captain’s life. It’s nice to see the events of “Inner Light” were not forgotten.)

“Chain of Command, Part 2” — Season 6, Episode 11: This second half of a 2-parter stands alone as a tour de force for Patrick Stewart. This is the one where Picard is tortured by Cardassian Gul Macek, played to vile perfection by David Warner. Great chemistry and dialog carry this difficult topic with aplomb. There are FOUR lights!

“Tapestry” — Season 6, Episode 15: A must-see exploration of the road not taken in Picard’s life. Q shows him what kind of man Jean-Luc would have become if he never took on that Naussican in a duel.

“All Good Things…” — Season 7, Episode 25/26: This series ender is the best finale in the Trek franchise, and with good reason. Jean-Luc is taken on a whirlwind trip back and forth through time in order to save all life in the Universe. And, of course, Q. With a creepy callback to Humanity’s ongoing trial — continued all the way from the very first episode at Farpoint Station. It’s pure temporal excitement, offering some reasonable potential futures for the characters we’ve grown to love over seven years of The Next Generation. The sweet, touching denouement is the perfect cherry on the TNG cake.

You might want to rewatch “Encounter at Farpoint Station” (Season 1, Episode 1) to get up to speed on the themes recurring with Q and the trial of humanity that never ends…

Star Trek 8: First Contact: With four Next Gen movies in the can, only one rises to the top as outstanding. If you enjoyed Picard’s gig as a Borg in “The Best of Both Worlds” (also referenced in “Family” and “I, Borg”), then it will be a treat to watch Picard in Action Mode to hunt and kill the Borg infesting his ship. There’s also time travel, lots of Data, good ensemble moments for every main character, a standout guest star, one of the top world-building moments in all of Trek, and the craziest Picard Speech ever. (“The line must be drawn HERE. This far! No further!” “Um…You broke your little ships.”)

So you can now boldly celebrate Captain Picard Day at home or in your own starship. Tug your shirt down and engage.

These are my picks, after being a lifelong Star Trek addict. I know many of you will have episodes you want to be see on this list. Which are your top Captain Picard episodes? Do you prefer a delicate Chateau Picard wine or a piping hot cuppa Earl Grey? Happy Picard Day!

All Star Trek: The Next Generation’s episodes are currently streaming on Netflix and Paramount+.