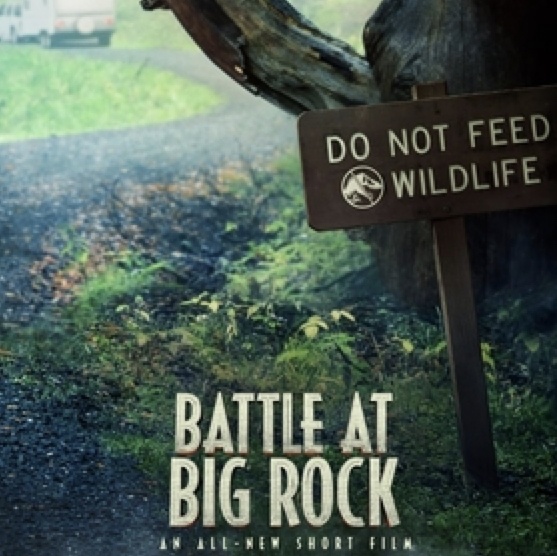 If you haven’t yet, watch the canon Jurassic World short: Battle at Big Rock. The main thing to understand is that this takes place officially and immediately after the end of Jurassic World: Fallen Kingdom, and before Jurassic World Dominion.

SPOILERS: Don’t read any further if you have not seen JW2: Fallen Kingdom, or don’t remember how it ends.


An interesting note to set the mood properly: notice the Earth depicts Pangea’s continents, not the current arrangement (insane attention to detail!), then watch the lights resolve as the Universal Studios logo forms..into…something. And listen to the soundtrack right from the get-go…it should all feel eerie and familiar.

Remember this ten-minute (2019) short is considered canon material! It’s written and directed by Jurassic alum Colin Trevorrow. The CGI is by no less than Industrial Light & Magic. To maintain secrecy on the project, no auditions or casting calls were held.

The idea: as the dinosaurs were released in Northern California, people camping nearby might be the first to encounter some.

The story is family-friendly and even family-positive. In these days of Superheroes Galore, it’s nice to see a small story, using small solutions — with a diverse group trying to hide in yet another RV (callback!) as an Allosaur checks out the “crunchy on the outside, juicy on the inside” concept.

You do get a few good glimpses of different dino types (awww, a baby Triceratops), plus the patented “TEETH shot through a window.

I’ve said it before, but here it is again, “Don’t take your infant into the wilderness.” Haven’t these people ever seen A Quiet Place?

As often is the case, the little bits during the credits are the film’s best parts. All we really need are those (hilarious) one-second moments to imagine the mayhem going on across the world. So stick around through the end…and THEN go watch Jurassic World Dominion in the theaters.

Movie Grade: A- for the short (plus the “found footage” bits). Actually, it’s pretty solid, so just watch it now.

You can catch the short on YouTube, or hopefully, this will stay up on here:

Jurassic Park And Other Dinosaur Films