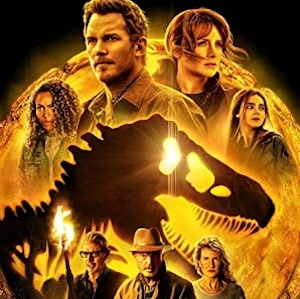 Jurassic World Dominion takes the DNA from all the previous Jurassic films to create a movie that doesn’t fly, doesn’t roar, doesn’t run, jump, or swim. It does manage to lumber from scene to scene, dragging out the action sequences far too long. This is a script that needed another year of editing, at least.

This is seemingly the culmination of the Jurassic World trilogy and for the first time, the original trio of Alan Grant, Ellie Sattler, and Ian Malcom are reunited. In addition, there’s Lewis Dodgson, Dr. Henry Wu, and the original T-Rex. Even the Barbasol can has a cameo. These ingredients could have been mixed to produce something bold and insightful, but instead, we got retreads.

All teeth; no bite.

There’s not a single action scene with any sense of real danger because we know our main cast is going to make it every time. Take the chase scene in Malta. It went on and on and on. Especially the scene with Owen (Chris Pratt) riding his motorcycle. He just has to make one tiny mistake and he’s going to be dinner, but time and time again he just manages to dodge the raptor’s attack. And the whole time we know he’s going to make it.


Admittedly, this is a common problem stories have with the “mid-movie action.” It’s too early to kill off any of the main characters. Where’s the drama going to come from? If it’s done right an ancillary character will be sacrificed which will further enhance the hero’s motivation toward the end of the movie. This option was presented via Owen’s old friend from the first Jurassic World movie, but they passed that up. Even he survives.

Speaking of artificial drama, how many times do we have to watch a carnivorous dinosaur circle our heroes before attacking, then at the last second something saves them, but the bad guy gets eaten with hardly a pause? This is okay once or twice, but they drained that well dry in this movie.

What exactly was Lewis Dodgson’s motivation? He seemed genuine when he said it wasn’t about the money and they were going to save lives. So what then was the point of the grasshoppers? I’m going to see the movie again Sunday with friends and I’ll pay close attention to see if I can sort out what the plot was, but after one viewing it seems rather inconsistent.

There’s no question, the movie wasn’t all bad. It’s like eating a rather bland salad with bits of pulled-pork mixed in. (What I had for lunch yesterday at Whole Foods buffet.) For the most part the scenes were just empty calories, but here and there were some nice juicy bits. I don’t want to spoil anything specific, but every character gets at least a few nice moments to shine and remind us that the Jurassic franchise isn’t just about dinosaurs. Actually, even a few beloved dinosaurs get their moments.

Science: good; bad; a little bit of both?

All of the Jurassic movies have painted an inconsistent image of science. And let’s face it, a large majority of the population derives their understanding of science from movies such as this. Take for instance GMOs. A movie comes out that paints GMOs as a bad thing. Many viewers go home and search for information on the topic, but if they search “are GMOs bad” they are likely to get results that back up the idea that they are. Conversely, searching for “are GMOs good” will largely return results that support that claim. But neither really helps the reader understand what GMOs are, how they work and what’s good and bad about them.

And by the way, grasshoppers can’t get nearly that big because insects don’t have a circulatory system like other animals. Insects in the distant past were gigantic because the O2 levels in the atmosphere used to be nearly double what they are today. But that doesn’t mean genetically modified grasshoppers couldn’t be modified and used as a weapon against the food source of other nations. What is concerning is that the techniques needed to achieve such things are becoming more accessible to garage-level biohackers. Someday a bio-terrorist could create something that would wipe out a nation’s crop in their spare bedroom.

Where do we go from here?

Even though Jurassic World Dominion officially wraps up the Jurassic World trilogy the producers and director have publically stated that they expect the story to continue in some fashion. I just want to say that this Jurassic fan would be delighted if they focused on making smart movies over cheap action movies. Some action is nice, but don’t make that the draw. Please give us a movie that inspires conversation and maybe even a little debate. But don’t give science the short-shrift. You can make a thoughtful movie that challenges people to learn more about these important topics rather than paint inconsistent and clashing pictures of the role science will play in our futures.

About The Peetimes: I would like to have more Peetimes for this movie, but the ones we have are pretty well spaced out. The 1st Peetime has a lot of exposition but the synopsis will catch you up. The 2nd and 3rd Peetimes involve some action, but nothing that’s going to knock your socks off. I think the 3rd Peetime is the best of the bunch, if you can hold it that long.

There are no extra scenes during, or after, the end credits of Jurassic World Dominion.

Plot
Four years after the destruction of Isla Nublar, dinosaurs now live—and hunt—alongside humans all over the world. This fragile balance will reshape the future and determine, once and for all, whether human beings are to remain the apex predators on a planet they now share with history’s most fearsome creatures.

chevron_left RunPee Weekly Newsletter #117 (June 8th, 2022)
Is there anything extra during the end credits of Jurassic World Dominion? chevron_right