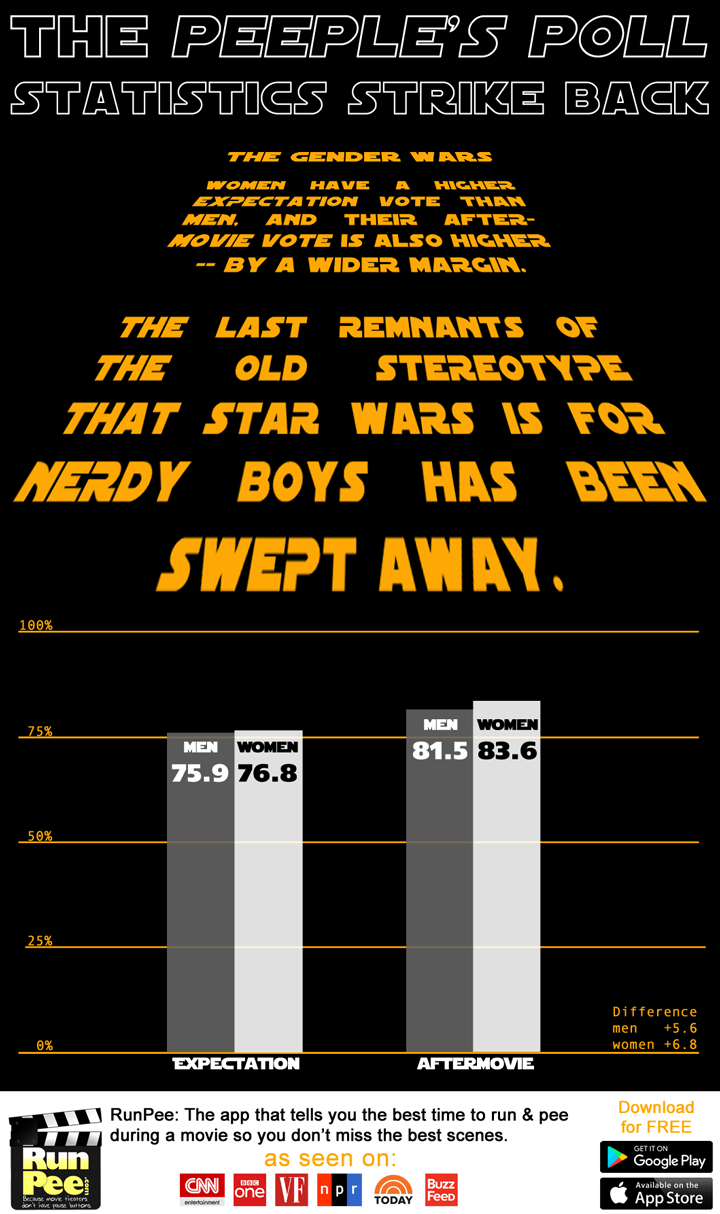 If you go to IMDb.com you’ll see Star Wars: The Rise of Skywalker has a rating of 6.9/10. And at Rottentomatoes.com #RoS gets a 86% from users. (And 53% from critics, but who cares what critics think?)


That’s nice to know, but user polls like that have always bothered me, because  I don’t know who’s voting. The assumption is that if enough people vote, then it really doesn’t matter. But is that a good assumption? Let’s test it and find out.

In the RunPee app we have a user’s poll — we call it the Peeple’s Poll — that breaks down user voting more precisely by age and gender. We also ask users to submit their expectation vote before seeing the movie to compare with their after-movie vote, to see how a movie performs based on expectations.

Lets see what the Peeple’s Poll numbers have to say about Rise of Skywalker.

Raw data of results by gender

Women have a higher expectation vote than men. And, their after-movie vote is also higher — by a wider margin. The last remnants of the Old Stereotype that Star Wars is for nerdy boys has been swept away.

An after-movie rating in the low 80% range is respectable. For context, an 82.1 score would put Rise Of Skywalker as the 28th best movie of 2019 — just slightly ahead of Joker.

Peeple’s Poll voting by gender for ALL MOVIES

Remember, the numbers above are for all movies. The expectation vote between men and women differ by 1.0 points, while the after-movie vote differs by 1.5 points. Not huge, but I think it’s interesting that women generally are happier with a movie than men.

Star Wars: The Rise of Skywalker departure from average.

Here we can see the departure from average is a little greater for men than women, but again, women still rate the movie higher.

However, in a deeper context, the trend is for women to have an expectation rating that is 1 point higher than men, and in the case of #RoS it’s 0.9.

Let’s call that a wash.

On the other hand, the trend, when considering all movies, is for women to have an after-movie rating that’s 1.5 points higher than men. In the case of #RoS, men are +1.4 and women are +1.0. Women’s after-movie rating is higher, but not by the margin we would expect according to average.

Star Wars: The Rise of Skywalker expectation by age/gender

You can see that, in general, women had slightly higher expectations across all age groups, except for the 20-29 range. But more interestingly, I think, the 20-29 age range was lower for both genders by wide margins. If you have some reasoning for, that I’d love to hear it in the comments. Notice also that, among women, those under 20 had the highest expectations, while those 20-29 had the lowest expectations. A stark contrast for two adjacent age groups. But, that’s life.

Star Wars: The Rise of Skywalker after-movie by age/gender

This is where it gets really interesting. What’s up with women under 20? We saw from the expectation chart that women under 20 had the highest expectation, but it’s crazy how much that groups after-movie rating stands out. My guess is that young women identify with the protagonist Rey and young men identify with Kylo Ren. I don’t want to get into anything spoilery, so I’ll leave it at that. But if you’ve seen the movie you can see how the outcome of the characters could have a strong influence on the weak minded young. 🙂

Want to get punched in the nose? Go tell a teenage girl that #RoS sucked. Note: of the 2,800+ votes for #RoS women under 20 has the least number of votes at just 19. I’ll check back in a few days and update to see there are any changes.

The other thing I notice from the after-movie chart is, among men, those in the 30-39 range had the lowest rating for the movie of any group. Why? Let’s see… A man of about 35 would have been around 15 when Phantom Menace came out. Does the scar of Jar-Jar still haunt them? You tell me.

One other statistical result is worth mentioning, and that’s the percentage of votes by women vs men for all movies and for #RoS.

Percent of voters by gender

For Rise of Skywalker women account for 41.6% of the votes, down 7.9% from the overall trend. My interpretation is that, while women rate #RoS higher, men account for a disportionate percentage of the audience. At least among RunPee app users.

We’re just getting started here. Tell me, what other sorts of statistical breakdowns would you like to see in the future?