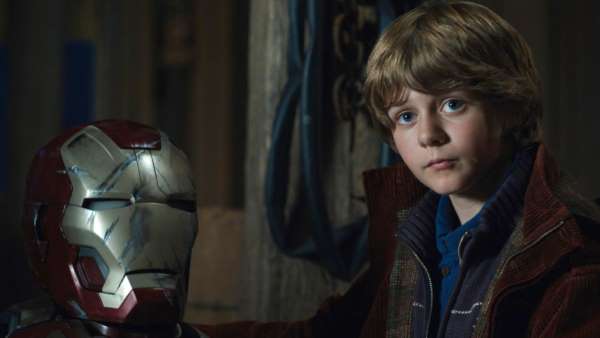 Who is that teenager from Avengers Endgame standing there at the end with our heroes — but a little apart —  looking vaguely familiar? With no explanation given? It’s like Broom Boy from The Last Jedi, all over again. Who is that kid?

Want to try to guess where you’ve seen him before in the Marvel Cinematic Universe? Shave off a few years. Make him around ten. Do you remember which movie he had a MAJOR role in?

It’s okay if you can’t remember, because his movie came out in the early days of the MCU, and his character was promptly forgotten. The MCU has a literal cast of thousands by now, especially if you include everyone in the Wakandan army from Avengers Infinity War. If you’re not a real die-hard MCU fan, it can be hard to keep all those faces and names straight.

So, who’s the kid in Endgame?

It’s 17-year-old actor Ty Simpkins, reprising his role of Harley Keener: the kid from Iron Man 3 who gave Tony Stark a little sanctuary — and a lot of geeky help — when Stark needed it.  The two made a good connection, and the kid character was enjoyable to watch, instead of precociously irritating. (Although I think Robert Downey Jr could have chemistry with a mailbox if the role called for it.)

Harley is a forgotten hero in the MCU, but that doesn’t mean he won’t come back for Phase 4. He made one half of a great team with Stark, and has a bright scientific mind of his own. And don’t forget, Stark left him some goodies to play with that he might have put to good use by now.

Stark seems to slip effortlessly into mentor roles. Just look at his relationship with Spider-Man. It might be because of the way Stark begins his journey as an overgrown kid, and naturally doesn’t want to see bright young people make the mistakes he did. Stark has come a long way after 11 years in the hero profession. Remember the days when he amused himself onstage by peeing in his Iron Man suit?

Will Harley make another appearance after Avengers Endgame?

Harley’s old enough to help our heroes in a meaningful way now, should they choose to take him on for the new generation of Avengers.  Get that boy a shield! Or maybe his own Mark V Iron Man special.

There’s no reason not to see this kid again after Endgame, since we know Phase 4 of the MCU begins next. Also, now that Earth knows a gazillion intergalactic beings exist, you can’t have too many heroes to help keep them safe.