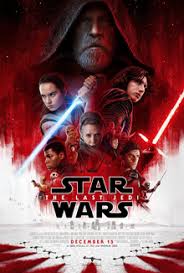 It’s too soon to know how I feel about this latest installment to the Star Wars saga. A lot happens, at a brisk pace. We have fleeting introductions to a bunch of brand-new characters we never get to know; why they rounded up well-known actors for little more than extended cameos is beyond me. It’s a long movie, but maybe a lot of character development was cut anyway. I wouldn’t mind a Director’s Edition, like we saw in the Lord of the Rings trilogy.

There’s a great deal of humor, but while some of it’s clever, the rest is somewhat more goofy than usual for this series. People at opening night really got into everything, though, applauding, laughing, squealing at certain appearances (no spoilers!). Definitely everyone enjoyed themselves in a totally packed theater (sold out across the nation, apparently). At least the critters are “good cute”, instead of overly cutesy, which is nice. (Porgs! Crystal Foxes!) The blue milk “cow” was admittedly very strange, but did harken back to Luke’s moisture-farming childhood. All the scenes on Luke’s planet were hugely pretty and interesting. The island scenes even had a Degobah flavor, while looking nothing like a swamp. Nicely done. In spite of trailers spoiling a lot of it, those were my favorite scenes.

Everything with Luke Skywalker…well, I’d describe those as magical. Riveting, even, as it should be. Mark Hamill absolutely carried the film and deserves a special shout out.It warmed my heart to see him back in action, in both grumpy and heroic modes.


Rey and Kylo were great, and I liked seeing them interact again. Rey did a bit better, with actual character development. Kylo was kind of stuck at the same emo place we saw him before. His parts with Rey were highlights, though — they have a great rapport! I hope to see more of it, next time. The big fight scene (being vague here on purpose) was excellent.

Poor Finn doesn’t come across as well as he did in The Force Awakens, and he was such a bright light in that film. I think having him separated from Rey and Poe made it problematic, chemistry-wise. Boyega did so well interacting with Ridley and Isaac. This time his sub-plot felt flat and extraneous. It could have been the writing. I’m not sure yet.

Carrie Fisher’s post-death swan song finalized in a strong way, and that was a huge relief. I don’t know how they’ll bring her character to a resolution in the last film of the Skywalker Saga, but it was a shock to see the actress “live” here, after her untimely demise a year ago. I worried it might feel tacky or forced. It definitely worked. She has a lot to do, and did it well. I think Our Princess would be very happy with this movie.

So, a good installment, definitely superior to the Prequels — but I’m not sure yet where I’d rank it among the others. It’s probably for the best anyway to think a bit on The Last Jedi before passing judgment. When you build something up so much in your mind for so long, better thoughts parse (or parsec?) out after time passes.

I need a second and third viewing. It took me a year to figure out where to place Rogue One, although I was so happy with The Force Awakens that I instantly gave it 3rd place. This series has been so plagued with disappointment. I don’t think Star Wars is done yet, by any means, and I’m not a hater of The Last Jedi at all. But I may not be a huge fan of director Rian Johnson.

NOTE on the 3D version: Only a few scenes made 3D worthwhile, but it wasn’t noticeably darker, as can happen with those glasses. 3D really only came into play at the end battle on the salt planet, with the red soil, and in some adorable Porg shots. I didn’t notice much else. Ultimately, I wouldn’t shell out for the extra money for a 3D showing. If you’re a huge fan, consider 3D for a one-time viewer experience; otherwise stay with 2D.