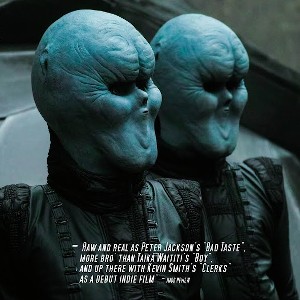 Typical… you wait ages for talented, New Zealand based film directors with an offbeat sense of humour — and then three come along at once!

First there was Peter Jackson. Now he’s synonymous with anything Tolkienesque, but way back in the days of VHS tapes he was the master of the comedy/horror/sci-fi genre; check out Bad Taste and Braindead if you don’t know them already.


Then we get Taika Waititi. He’s carving a niche for himself in the Marvel Cinematic Universe. Thor: Ragnarok really revitalised what was, in my humble opinion, the weakest branch of those films; arguably duller than The Hulk standalone efforts. But he’s also done great stuff with What We Do In The Shadows, Hunt For The Wilderpeople, and the simply wonderful Jojo Rabbit, after starting off making TV shows.

So who’s the third one, I hear you ask, and my answer to you is a marvellous chap called Shae Sterling. Slightly differently than his fellow countrymen, Shae has been making waves with his music videos. I have just one thing to say about them… beautiful! Take a look at his Director Showreel on his website — www.shaesterling.com — and you’ll see what I mean.

And, just like the other two Kiwi directors, he’s broken into feature films. His first is the first rate sci-fi/comedy Alien Addiction, which is now available to rent or buy, disc or download, from your usual sources.

How to watch Alien Addiction (which you really should treat yourself to):

I not only had the pleasure of reviewing Alien Addiction, but I was also lucky enough to have a chat with the writer/director Shae himself. I could tell you what we talked about, but you can read my interview here. Alien Addiction is a very funny and anarchic film. One of those delightfully silly, slightly batty escapades where everybody involved seemed to be having a ball making it.

Do yourself a favour… get a few mates, a few tinnies, and settle down and watch Alien Addiction. You’re welcome!

chevron_left Is there anything extra during the end credits of 2 Hearts?
Indie Movie Review – Attack Of The Demons — it’s animated and it’s horror! Why isn’t this done more? chevron_right