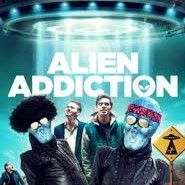 So here we have a debut feature from director Shae Sterling. I say debut, but he’s been around for decades and has 125 music videos to his name… this just happens to be his first feature length film. Not content with directing, he’s also written, produced, edited, and been the cinematographer on Alien Addiction.

But that’s the nature of independent film making

Nobody’s throwing millions of other people’s dollars at you to hire swarms of staff to do everything, while you sit back in your canvas seat and shout through a megaphone! I wonder if it’ll be long before we start mentioning Shea Sterling in the same breath as Peter Jackson and Taika Waititi…

That’s the downside of indie films, but the upside is there are no studio accountants deciding whether a not a film should be made simply because it’ll make a profit… people can make the films that they want to make and, I guess, have some fun doing it. Alien Addiction looked like a lot of fun to make, and a fair bit of that comes through to the viewer.


There is a delightful silliness to Alien Addiction

The lead is Jimi Jackson as Riko, a gamer/slacker/stoner who meets and befriends a couple of little blue men. Apparently Mr Jackson is a big noise on YouTube and some other things I’m way too old to know about. It’s his feature debut as well; to be honest there are a fair few debuts here, but they all perform more than adequately.

Jimi looks as though he was having a ball making this, and he was perfect as an almost cartoonish character just staying the right side of caricature; he reminded me of a cross between Jim Carrey and Johnny Knoxville.

The other characters were similarly entertaining — Thomas Sainsbury as the alien hunter and Ayham Ghalayini as his much put upon P.A. were good value — as was Veronica Edwards, as Riko’s slightly batty aunt.

Probably the worst case of overacting and scene-stealing was perpetrated by New Zealand itself. The action takes place in a small, down-at-heel town in the Waikato district of New Zealand’s north island, just a bit south of Auckland. But the shabby paintwork on the houses can’t disguise the beauty of the surroundings. Whenever there’s an aerial shot, I just looked and thought “that’d do me”.

JoJo Waaka owned the show, and she knew it

Finally, I have to mention JoJo Waaka as the fabulous Jacinta; she stole every scene she was in. This is her only acting credit, as she died suddenly at the much-too-early age of 26 in January 2017. Although this was her cinema debut, she was an established presenter, MC, and a talented Kapa haka performer — and was the epitome of wahine toa — possessing all the facets of a strong Maori woman. I would have loved to see a lot more of her in future projects.

While I was watching it, I kept thinking this was like Peter Jackson’s Splatter Phase, but with better quality (wondering if that was down to VHS tapes?). In short, I do think we may hear more from Shae Sterling. For me, Alien Addiction gets a solid A, which is unheard of for the little indies we usually screen. Plus it won buckets of awards at several film festivals around the world. Don’t search for deep meaning here; just sit back and let the wacky wash over you.

We recommend catching this gem once it goes streaming September 29, 2020.