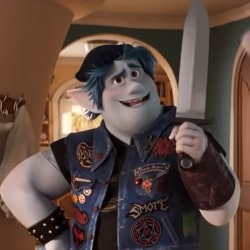 Pixar’s latest adventure Onward hit cinemas last March 6, and it’s one of the only films still in theaters (at least those that are now open, including many drive-in theaters).  It’s set in a world of mythical creatures such as mermaids, unicorns, gnomes, centaurs, manticores, and elves.  I thought it would be fun to take a look at other animated fantasy films.  To keep the list from becoming too Disney-centric, I decided to steer away from princess movies and fairy tale movies.  (Sorry, no Shrek.)

So here are my top 10 animated fantasy movies:


9. Sinbad: Legend of the Seven Seas

In this Dreamworks production, Sinbad the pirate must recover the lost Book of Peace from the goddess Eris to save his childhood friend.  Brad Pitt voiced Sinbad, Catherine Zeta-Jones voiced his love interest Lady Marina, and Michell Pfeiffer voiced the villainous Eris.  This was the last Dreamworks film to use traditional animation.

This is animator Ralph Bakshi’s first foray into fantasy.  It’s a post-apocalyptic story about two wizards at war, one representing magic and one representing technology.  Like most of Bakshi’s work, it’s a pretty strange trip.  I’ve only seen this one once years ago and I remember it being really weird.  It’s become a cult classic.

Robert Zemeckis brought his motion capture style of animation to the epic story of the warrior Beowulf and the monster Grendel.  Based on an Old English epic poem, this movie has swords, monsters, royalty, and battles.  It also has an impressive voice cast including Ray Winstone, Anthony Hopkins, Robin Wright, Brendan Gleeson, John Malkovich, Crispin Glover, and Angelina Jolie.  Neil Gaiman co-wrote the screenplay.  With a PG-13 rating, this dark fantasy isn’t for the kiddos.

This 1977 TV special was created by Rankin/Bass (that’s right, the production company behind the stop-motion Christmas specials).  Based on J. R. R. Tolkien’s novel, the movie tells the story of hobbit Bilbo Baggins, who joins a group of dwarves on their quest to reclaim their treasure from the dragon Smaug.  If you grew up in the ’80s, you watched this at least once.  Before Peter Jackson’s movies came out, this was how a generation of children were introduced to Tolkien’s work.

5. How to Train Your Dragon

Vikings and dragons.  What more can you ask for?  This 2010 Dreamworks production (has it been 10 years already?) introduced us to Hiccup and Toothless.  It also kicked off one of animation’s most satisfying trilogies.  The Dragon films are sweet, funny, and tragic.

4, Kubo and the Two Strings

This is one of my favorite underrated movies of all time.  The plot is hard to describe.  Just trust me: go watch it.  In feudal Japan, a 12-year-old boy must recover his father’s armor with the help of an anthropomorphic monkey and beetle.  This was easily one of the funniest, most touching, and most visually stunning movies of 2016.

3. The Sword in the Stone

Okay, okay.  So I let one Disney movie onto my list.  The Black Cauldron has a cult following from ’80s kids like myself.  But this Arthurian tale is the more popular choice.  This has been the introduction for many to the stories of the wizard Merlin and King Arthur.

One of the early memories of my childhood is the woods being on fire in this movie.  It really scared me and stayed in my imagination.  For any child of the ’80s, this is simply a classic.  A unicorn who finds out she is the last of her kind goes on a quest to find out what happened to the others.

If you’ve never seen any of Hayao Miyazaki’s films, this is a great one to start with.  It’s his take on Alice in Wonderland…  If Alice found herself stuck working in a bathhouse full of monsters.  It won the Academy Award for Best Animated Feature in 2003.  And if you like this one, you should check out Howl’s Moving Castle next.