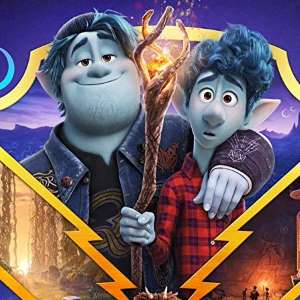 OnWard is just another average Pixar movie. Average for Pixar; better than most anything else.

The trailer reveals the gist of the story, but the central theme is left out. I won’t ruin it for you here by saying what it is, but it has the Pixar magic.

What Pixar does consistently– and better than anyone else — is tell layered stories that don’t rely on obvious tropes. Or they at least mix common tropes in unexpected ways.


The chemistry between Ian (voiced by Tom Holland) and Barley (voiced by Chris Pratt) was magnificent. They expressed the story perfectly. If there were an Oscar for character voicing they’d both be nominated.

#OnWard will appeal to children, adults, mermaids, centaurus, and wizards of all ages.

The only reason I’m not giving this movie an A+ is that I don’t think it is iconic as other Pixar productions like Up, Wall-E, and Finding Nemo.

About The Peetimes: Vera and I did the Peetimes for this and both agreed on each. That’s a good sign the Peetimes were pretty obvious. All three Peetimes are good, but I think the middle one is the best.

There are no extra scenes during, or after, the end credits of OnWard. (What we mean by Anything Extra.)

Is Onward a Pixar film?

Is there anything extra during the end credits of OnWard?