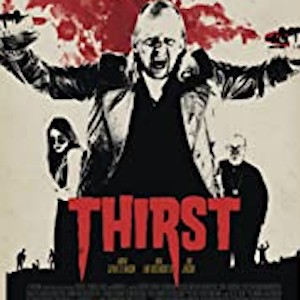 The Opening Scene of Thirst

NOTE:  The following description is very gross.  Read at your own risk.

The horror movie Thirst opens with a man meeting another man for sex.  Only what he doesn’t know is that the other man is thousand-year-old gay vampire Hjörtur (Saevar Steinason).  When I found out there was a gay vampire in the film, I was expecting something classier.  Like Val Kilmer from Kiss Kiss Bang Bang as a vampire. Someone attractive, well-dressed, intelligent, and articulate.


Instead, I got the balding, lonely, vamp of few words Hjörtur.  (Okay, seriously.  This is your last chance to bail.)  The gory scene ends with Hjörtur showing the camera the man’s severed, bloody penis in his mouth.  It’s a shocking opening to a truly gonzo film.  One that you can’t un-see.

What You Need to Know Before Seeing Thirst

This movie is not for you if:

–You are easily offended.

–You are very religious.

Okay, the rest of you that are left, you’re in for a wild ride with this movie.  It’s a cult classic in the making, but only if enough people watch it and tell their friends.  So let’s see if I can sell you on the best movie I wish I’d never seen.

Things You Will See in Thirst

SPOILER ALERT:  I intend to spoil the hell out of this movie in hopes of getting you to watch it.  If you’d rather go in fresh, turn away now.

The following are all things you will see if you watch the movie Thirst:

–Someone gets called my favorite new insult: “disco skank.”

–A man getting stabbed in the privates and gushing blood from his crotch like a fountain.

–A disturbing, Tarantino-esque backstory for a cab driver who we never see again in the film.

–A gay vampire cruising a guy at the gas station.

–A woman ask a vampire where he’s been all day with a straight face. (Seriously?!  Duh!)

–A gay vampire say, “It is not common for someone like me to be offered help,” without giving any context to what he means.  Someone gay?  Someone undead?  Who in the world is anything like Hjörtur?

–A random family watching TV that the movie keeps cutting to for no real reason, except for a slight bit of comic relief towards the end.

–A character profoundly tell his wife, “You never know where life will take you,” in reference to his lunch.

—  A police investigator kill a vampire with a cross and a Die Hard quote.  (Yeah, that one.)

–Someone gets their face ripped off.

–A vampire literally rips a man’s arm off and beats him with it.

–A woman watching her resurrected vampire brother eating the intestines of their still-living mother.  (Cards Against Humanity, please make this a card.)

The Plot of Thirst

Even though the plot is beside the point in this movie (and, let’s face it, it’s beside the point for most horror films), here’s what the film is actually about.  Hulda is a junkie accused of murdering her brother.  She can’t remember what actually happened because she blacked out for one reason or another.  This is a mystery the movie never actually solves.

After being released, Hulda runs into Hjörtur being mugged in an alley.  She tries to stop them, giving the vampire an opportunity to attack.  Witnessing this crime lands Hulda in the interrogation room for the second time that night.  The vampire finds her and they sort of bond over hot dogs.  He tells her, “I don’t touch women.  I’m a gentleman.”  (Ask his victims how much of a gentleman he is.)  One has to wonder how he stays undetected when he leaves such a large body count in his wake.

Meanwhile, police inspector Jens and his prophet wife Esther become convinced Hulda is either being followed by something evil, or is possessed by Satan. Hjörtur, wanting to show friendship in any way possible, resurrects Hulda’s dead brother as a vampire when she says she wants him back.

And I’m just going to stop here.  You’ve already got a gay vampire, a drug addict, an inspector, a doomsday prophet, and some upcoming vampire sibling rivalry.  If you’re not sold on this movie yet, I don’t know what else I can tell you to get you to watch it.

Technically no.  While Hjörtur is a monster, he’s one you are supposed to sympathize with.

While the film isn’t necessarily homophobic, it doesn’t do the gay community any favors.  Hjörtur isn’t the kind of character that is going to change minds and hearts.  And the movie doesn’t know what to do with his sexual orientation other than having him bite penises off.  I mean, they could have made him a Romeo who is doomed to kill all those he falls in love (or lust) with.  That would have been interesting to explore.

If you don’t mind gore with your cheese, you can have a lot of fun with this movie.  I can’t imagine a group of friends watching this and not riffing it and/or coming up with new inside jokes.  Just because it’s not The Conjuring doesn’t mean it’s not a good time.  It’s a shocking film that will surprise you.  (Well, not if you read the spoilers above.)  The actors who portray Hulda and Jens give good performances.

So check it out, and if you do, let me know what you think of it.  Thirst is available for rent or purchase on streaming sites.

Movie Grade: C (But this goes up a grade if you view it with gonzo entertainment in mind!)