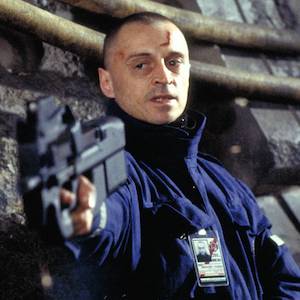 The World Is Not Enough was one of my first choices when we were going through the exercise of divvying up the Bond films for one main reason… Robert Carlyle. The first time I saw him was in Priest back at the end of the last millennium. At the time, the big draw was Linus Roache in the title role and, to be honest, his biggest claim to fame was that he was William Roache’s son and, in turn, his claim to fame was that he played Ken Barlow in Coronation Street. Now I haven’t seen it since Martha Longhurst died but I think Mr Roache Sr. is still going strong.

Anyway, I digress… Robert Carlyle played Graham in Priest and was the illicit love interest for the titular Father Greg. I remember thinking at the time that it was a powerful and thought-provoking piece (written by Jimmy McGovern, so no surprise there then), that was very well performed by a cast of, mainly, new faces; I recognised Tom Wilkinson, Cathy Tyson, Paul Barber, and Tony Booth and that was about it really. Then, over the next few years, I started spotting that face popping up on the TV and in films… the bad guy in Cracker, the mad guy in Trainspotting, the good guy in Hamish MacBeth, and the naked guy in The Full Monty. And it had to be the face that you recognised because the guy was a chameleon! Accents, mannerisms, and body language were all under his control and totally interchangeable. However, this article is about The World Is Not Enough but that won’t stop me pinching most of these first two paragraphs if I ever get around to writing a Robert Carlyle bio…

Welcome To My Nuclear Family

So back to The World Is Not Enough. As with every other Bond film, there is an opening sequence before the titles start to roll, this one holds the record for the longest to date at around the quarter-hour mark. I have read somewhere that it is so long that the opening titles are actually on the second reel. The youngsters might need the significance of that explaining to them… films didn’t always arrive on USB pen drives! Apparently the opening was originally going to end after Bond escapes out of the Swiss banker’s office on a rope but that sequence was deemed a bit dull, despite the woefully underused appearance of Patrick Malahide as Lachaise, and so they ran it into the first big action sequence… the one with the attack on MI6 HQ and the mad boat chase across London most of which is along the Thames.

When the dust settles after the attack on SIS HQ we are introduced to our main cast; Elektra King (Sophie Marceau) the daughter of the chap killed in the opening and Renard (Robert Carlyle) the terrorist who had previously kidnapped Elektra. We are also introduced to our villain’s peculiarity. In this case it is that Renard was shot in the head and the bullet is slowly travelling through his brain; it is going to kill him but, meanwhile, it has robbed him of his sense of pain. This means he can smash his fist through things and pick up red hot coals without feeling anything. A minor plot error is, well, Ok… he can’t feel the pain but that doesn’t stop the bones breaking or the flesh burning to a crisp and rendering his hands into little more than clubs.

So, despite that gaping plot hole, we’re off! The World Is Not Enough centres around a recently returned kidnap victim, rival oil pipelines, and stolen nuclear weapons. As well as all the usual gadgets, guns, and explosions there are two Bond girls. Unusually for this franchise, Elektra King starts off seeming to be quite normal so we’d better bring on someone, well, sillier. Enter Dr Christmas Jones (Denise Richards), an American nuclear physicist working in Azerbaijan and dressed like Lara Croft. As if that wasn’t enough she helped the film become the first in the Bond series to win a Golden Raspberry when Denise Richards was chosen as “Worst Supporting Actress” at the 1999 Razzie Awards. Richards and Brosnan were also nominated for “Worst Screen Couple” but lost to Will Smith and Kevin Kline for Wild Wild West.

Why Denise Richards is such a flop is hard to say

She has the Bond girl looks and appeal. There have been clever and attractive Bond girls before; Holly Goodhead, Natalya Simonova, and Melina Havelock. There have been stupider names; Xenia Onatopp, Molly Warmflash, and Jenny Flex. It’s not even as though she was untested; she was good in Starship Troopers and awesome in Drop Dead Gorgeous.

To be honest, I didn’t think she was any better or worse than previous Bond women in the less than serious Bond films. To my mind the weakest link in the Brosnan era Bond films was… Pierce Brosnan! He’s a good actor, good looking, and definitely in the top five Bonds. It’s just that when he has to show pain or stress he pulls the most ridiculous facial expressions.

You’re Not Retiring Anytime Soon – Are You?

One particularly sad part of The World Is Not Enough is that it is the last appearance of Desmond Llewellyn as Q. Apparently he was planning on retiring after the next film which you can see by the introduction of John Cleese as his replacement. Unfortunately, though, that was not to be as he died in a head-on car crash on the A27 in East Sussex three weeks after The World Is Not Enough was released. When he says his final line “always have an escape plan” and sinks into the ground it does bring a lump to the throat and a tear to the eye.

Other characters who leave us after this outing include Robbie Coltrane as Valentin Zukovsky and Michael Kitchen as Bill Tanner although Tanner returns in the Daniel Craig era but played by Rory Kinnear.

We also say goodbye to the product placement deal with BMW which paves the way for Aston Martin to come back with models old and new. There is an unorthodox cameo in The World Is Not Enough. I’m not talking about a walk-on for a producer or a quick shot of the current reality show flavour of the month, I’m talking about something much classier. In Castle Thane, the Scottish MI6 alternative office, there is a portrait of Bernard Lee, the original and longest-serving M. Incidentally, the castle used for Castle Thane is Eilean Donan Castle, Kyle of Lochalsh, in the Scottish Highlands and has been seen in Highlander, Entrapment, Rob Roy, and many more.