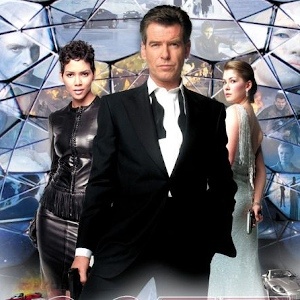 Die Another Day has one of my favorite Bond openings.  Bond fails to win the day and gets captured.  We’ve never seen Bond held captive for so long before.  (The opening credits compress time and show us some of the torture and interrogation Bond endures.)  At that point in my life, I don’t think I realized you could do that to a hero.  It was a revelation for me.  Even though it’s not a fan favorite, I’ve always had a soft spot in my heart for Die Another Day.  It’s one of the handful of Bond films I got to see with my Dad in the theater.  The theme song has personal meaning for me (see below).  And I was crushing pretty hard on Halle Berry at the time.  (Weren’t we all?)

What I Love About Die Another Day

Halle Berry’s Jinx is one of my favorite characters in the series.  It’s rare that Bond finds a woman who’s a match for him both in and out of the bedroom.  The scene where Jinx and Bond flirt is hot and filled with dirty double entendres.  You can cut the sexual tension between them with a knife.  Their love scene is one of the sexiest moments in the series.  Jinx is badass chasing after a helicopter as she shoots at it.  And then making her escape moments later by diving backward off a cliff.  It’s a shame that her spin-off film never came to fruition.


To get my reviews done on time, I had to skip Tomorrow Never Dies and The World Is Not Enough (I also somehow missed them in the theater, despite loving GoldenEye).  So this was my first time seeing John Cleese take over the role of Q.  Cleese is great fun in the role.  The dialogue is witty.  (Bond:    “You’re cleverer than you look.”  Q:  “Better than looking cleverer than you are.”)

The beautiful Rosamund Pike plays Miranda Frost.  It’s hard to believe how young she looks here and that this was twelve years before her impressive performance in Gone Girl.    She also has some of my favorite dialogue in the film.  When Bond asks if  he can expect the pleasure of her in Iceland, she replies, “I’m afraid you’ll never have that pleasure, Mr. Bond.”  Later, she dresses him down.  “Sex for dinner, death for breakfast. It’s not going to work with me.”

There’s an extended sword fight that’s one of the best action scenes in the film.  It’s a shame there haven’t been more sword fights in the series.  I’d gladly trade a few of the less memorable car chases for some sword fights.

The ice palace is my favorite Bond setting in the entire series.  I think it’s beautiful and astonishing.  I wish more of the film were set there.

What Doesn’t Work In Die Another Day

The first half of Die Another Day is stronger than the second half.  The setup is a lot of fun, but most of it doesn’t pay off that well.  The plot twists are fun but don’t carry the same emotional weight as in GoldenEye.  There’s a scene of patricide that should feel tragic.  Instead, it feels just like any other death in the film.  The invisible car, while an impressive gadget, doesn’t make for a memorable car chase.  Jinx’s early scenes are sexy and funny.  She becomes less interesting as a damsel in distress who has to be rescued twice.   Madonna is wasted in a tiny role that she barely pulls off.  The destruction of the ice palace should have been a great action scene.  Instead, it feels kind of bleh.

The movie starts out with a fairly dark plotline of Bond being captured and tortured and then setting out to find out who betrayed him.  The rest of the movie has a lighter tone than it really should after such a dark setup.  The tone should probably be closer to, God forbid, License to Kill or at least GoldenEye.

I’m torn on the artificial intelligence/virtual reality scene.  I’m not sure traumatizing the audience with the deaths of beloved characters is worth the “gotcha” moment.  It is used in a humorous callback towards the end of the film that I enjoyed.  At least in both instances, it shows us moments we don’t normally get to see in the Bond series.

M only has one good line of dialogue (“Your freedom came at too high a price.”)  Her scenes in the film aren’t nearly as satisfying as the M scenes in GoldenEye.

As with License to Kill, some of the deaths here are disturbing and feel more like horror than action.  Jinx and Bond use a laser to slice off Mr. Kil’s arm and use it to get past a hand scanner.  Zao is stabbed by a falling chandelier and the water turns blood red.

Opening stunt:  A mission goes wrong, resulting in a deadly hovercraft chase.  Afterward, Bond is captured and tortured.  I always loved this opening plot twist.  It’s rare you see such an iconic hero as Bond lose.  This is some Han Solo in carbonite stuff right here.

Title theme:  Madonna sings the catchy opening tune this time.  This song actually helped me through my suicidal depression.  “I guess I’ll die another day” became a promise to keep living.

Connection to a previous film:  In his scene with Q, Bond finds the old jet pack from Thunderball and the shoe with the switchblade from From Russia With Love.

Final Thoughts on Die Another Day

Die Another Day has two badass Bond girls, a thrilling opening sequence, and an awesome villain’s lair.  However, most of the action scenes are forgettable.  In short, the action and plot don’t stand up to GoldenEye.  Bond’s mission should feel more personal than it does.  It’s still worth watching but it can’t hold a candle to entries like GoldenEye, Goldfinger, and Casino Royale (2006).