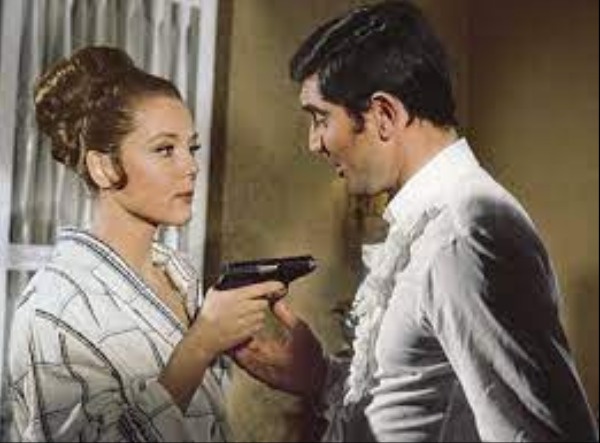 On Her Majesty’s Secret Service is a strange entry in the Bond series.  Sean Connery left the series partly due to money disputes (only to return for a bigger salary in Diamonds Are Forever).  This is the only film in which George Lazenby plays Bond.  There’s no title song during the opening sequence, making it the weakest title sequence so far.  The film opens with Lazenby breaking the fourth wall and making a joke about “the other fellow” who plays Bond.  And frankly, the first half of the movie is a snooze fest.  It’s a lot of setup that doesn’t seem like it’s going to pay off.  And then somehow it does.

What’s disappointing about On Her Majesty’s Secret Service

Let’s address the elephant in the room.  George Lazenby simply isn’t a very good Bond.  He doesn’t know how to deliver the double entendres.  (I would realize a scene or two later that he meant something to be sexual.)  He’s too wholesome-looking.  Lazeby looks like your best friend’s father.  He is bland and he lacks charm.  This movie works in spite of him rather than because of him.  It’s a blessing he got out of his contract to do six more films.  However, he does excel at the romantic scenes towards the end of the film and expresses genuine emotion.  He’s especially vulnerable in the final scene.

Diana Rigg’s Tracey, the main Bond girl, is almost unbearable in the first part of the film.  Her “mystique” gets old quickly.  I couldn’t have cared less about why she wanted to kill herself.  In the second half of the film, her kamikaze ways actually prove useful and she ends up becoming an endearing character.


What I love about On Her Majesty’s Secret Service

The movie kicks into high gear once Bond arrives undercover at the villain’s hideout.  And especially when he meets his old nemesis Blofeld again, this time played by Telly Savalas (TV’s Kojak).  Savalas makes an excellent villain. He’s smooth, he’s confident, he’s sinister (we find out how sinister at the end of the film), and he’s got that voice. He’s even got the nerve to try to seduce Bond’s girl.

After this film, I was excited to see where Blofeld would show up next and who would play him.  Unfortunately, Diamonds Are Forever disappoints on that front.

One of the most suspenseful scenes so far in the series appears in On Her Majesty’s Secret Service.  It involves Bond trying to escape while climbing across a cable car wire.  There’s an action scene I like where Bond is pursued down a mountain by the villains, all of them on skis.  It’s a welcome change from the car chases (although they do manage to throw in one of those, along with a snowmobile chase at the end).

One of my very favorite things about this movie is the romance.  I’m curious if there’s this much romance in any Bond film until Casino Royale (2006).  The montage of Bond and Tracy together at the end of the film, their scene in the barn together, and the SPOILER ALERT wedding are all so romantic.  If you’re a lover, this is the Bond film for you.  In fact, the reason I chose this one in the draft is that it’s the one where Bond gets married.

M plays a more significant role this time, rather than simply introducing the mission.  It gave me a newfound respect for the character.

Not to give anything away, but the movie has one of the most memorable and shocking endings in the series.

On Her Majesty’s Secret Service statistics

Opening stunt:  Bond has gone missing.  He saves a woman and beats up some goons on the beach.

Gadgets:  There are no real gadgets to speak of this time around unless you count radioactive lint.  The obligatory Q scene in the lab is missing, though he does show up briefly at the beginning and the end of the film.

Bond girls:  Tracey, Ruby Bartlett, Nancy.  Tracey is treated better than the typical Bond girl, as 007 actually falls deeply in love with her and even *****SPOILER**** marries her.  However, he still cheats on her with other women over the course of the film.

I cringed to see that most of the women at Blofeld’s clinic are referred to in the credits by their perceived nationality instead of being given a name.  Bond suggests a suicidal woman should stay alive long enough to sleep with him.  A father knocks his own daughter unconscious to essentially kidnap her.  (You can see this in the preview below.)

Title theme:  The opening credits are instrumental this time.  Louis Armstrong does sing “We Have All the Time in the World,” a beautiful love song, during a romantic montage towards the end.

Connection to previous films:  Bond wants to get Blofeld’s location from Tracy’s father.  Bond hasn’t found Blofeld after searching for him for two whole years.

Connection to a future film:  “The world is not enough” is the motto on a coat of arms.  It’s also the name of a Pierce Brosnan entry later in the Bond series.

Henchman: Irma Bunt is Blofeld’s right-hand woman this time.  Again, she’s nowhere near as memorable as Oddjob.  I don’t think any henchman will be until Jaws shows up.

Final thoughts about On Her Majesty’s Secret Service

During the first half of the film, I found myself begging for that asshole with the eye patch from Thunderball to burst onto the scene.  Or better yet, Orson Welles as Le Chiffre from Casino Royale.  But once Bond arrived at Blofeld’s place, the movie really picked up and lived up to its potential.   This started out as a C or D movie. Then it turned into a movie I love.  Especially after watching Diamonds Are Forever and Live and Let Die, neither one I found as enjoyable or exciting as On Her Majesty’s Secret Service.