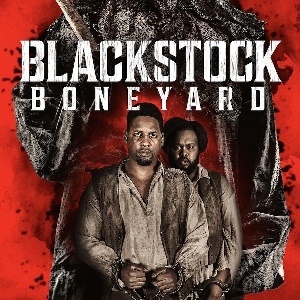 Blackstock Boneyard, or Rightful as it was originally called, is the story of two landowners who were wrongly accused of robbery, rape, and murder. In order to get a fair trial, they have to sell their land. Actually, they had to sell all their assets to get any sort of a trial as they were Black and this was South Carolina in the early 20th century. That part of the story is true, in fact, two other Black men were executed for the same crime. The man who was murdered and robbed was a White Confederate veteran, and the alleged rape victim was a Black woman — but she was never called for fear of a miscegenation scandal. The four men were executed based on the evidence of a known thief who was in possession of the dead man’s pistol.

So far, so good. We have a tale involving a brutal crime, a forbidden love affair, and a miscarriage of justice all based on a true story… that is far more substance than a lot of films have to play around with.

Unfortunately, Blackstock Boneyard does away with all the fact-based material in the first five minutes before the title card pops up. From this point on it becomes a work of fiction and not a particularly good one.


For some reason, the action is moved from South Carolina to Louisiana. I don’t know whether or not racism was more or less prevalent in either state then and now; either the writer (Stephen George) or the director (Andre Alfa) seemed to think it was necessary to use the real names of the people involved but move the location about a thousand kilometres away.

Well, the trailer says that the action starts in Louisiana on 29th September 1913 but, when we get to the present day, one of the girls in the car says that they are heading to Blackstock, South Carolina so…

Ay, But To Die, And Go We Know Not Where

So Thomas and Meeks Griffin (played here by David Jite and Dean Wilson) are sent to the electric chair and all their land and assets end up in the hands of the very people who brought them down. Over a hundred years later, a descendant of one of the people who benefited from the fraud finds out that their relative has died and they’re in line to inherit a goodly sum. This leads to them jumping into a car and zipping over to whichever state they’d decided was still exceptionally racist.

Actually, according to Apple Maps, there’s only a Blackstock in South Carolina so I’ll stick with that and just have to wonder what the heck the trailer is going on about!

The exceptional (I hope!) level of racism demonstrated in Blackstock, South Carolina ultimately leads to the downfall of, well, pretty near everybody. An attempted lynching in a cemetery leads to the Griffin brothers rising from the grave and promptly seeing off the White lynchers; a different approach to the local law enforcers who saw what was going on and, basically, let them get on with it.

From that point onwards, Thomas and Meeks wander around the town killing everyone regardless of guilt or innocence. As a result, what started as a promising story of a historical injustice rapidly descends into a sub-standard slasher, horror, gorefest. The only semblance of a moral seems to be that while racism is wrong and institutional, sanctioned racism is wronger.

The Worst Is Death, And Death Will Have His Day

But not only is Blackstock Boneyard a poor example of the genre which has badly wasted a potentially gripping true story, but it is also badly made, poorly performed, and riddled with mistakes.

Perhaps the best performances come from the aforementioned David Jite and Dean Wilson as the Griffin brothers. At least, during the court and execution scenes; when they come back as the hooded, reanimated corpses they are more like poor Boris Karloff impersonators.

The rest of the cast are all unlikeable; the Blackstock locals because of their arrogant hyper-racism, and the visiting girls due to the stereotypical, air-headed bimbo presentation, only interested in-network coverage and how the humidity will affect their hair.

Then there is the seemingly endless list of mistakes.

The stolen pistol is obviously a flintlock type but that doesn’t stop it from being used continuously like an automatic. The Griffin brothers appear to be buried in a civic graveyard rather than the prison cemetery. The police station appears to be in a derelict building with plaster peeling off the walls; honestly, guys, a splash of emulsion would have made all the difference! The special effects are woeful. I know that they were working on a low budget but there are ways around that.

Throw in that the brothers are shown to be guilty until near the end when the deception is revealed, and you are left thinking that their only motivation for rising from the dead and going on a killing spree is just plain meanness!