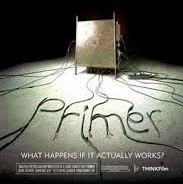 Primer was made with $7,000 USD, filmed mostly with two guys talking in a garage, and took home the Grand Jury Prize from the 2004 Sundance Festival. It features time travel, paradoxes, and a very dense script full of jargon. Primer doesn’t give anything away, and is barely comprehensible upon the first viewing.

Not only was the writer broke, but he filmed things in his own garage and starred himself. There are no special effects. There are no fantastical elements to speak of, no typical sci-fi trappings at all — but you’ll be still be intellectually challenged to keep up.


It probably helps to know that the confusion you feel is baked in — even the characters say they aren’t smart enough to handle temporal mechanics. They barely know how a cell phone works. They’ve just seen enough movies know to stay out of the way of their ‘doubled’ selves to not mess with the time continuum.

The Rules to Not Screw with Time

There’s an amusing scrap paper list of “how to not screw up your life using time travel’ as a sort of “primer” (thus, the title) to manage an increasingly Herculean task of not mucking with the future, as they spend more and more time in their machine. Of course, despite all the engineering babble they spout, neither you or me or they know how the thing works. They were going for a fact checking machine and got something of far greater consequence.

The list I mentioned is only halfway legible, even when you pause the play to take notes, but it has the various basic things that you or I or anyone navigating way over their head might come up with. The characters use some mundane solutions (hide in a hotel room all day with no TV or phones and play Scrabble, while your other self goes out and makes money/saves lives/help friends/worry.

There’s a strict routine for their shenanigans: put the time machine in a climate-controlled storage shed. Take Dramamine to stay calm in a coffin-like box for hours. Record everything you do or say or hear each day so you don’t trip over yourself.

Eventually we get a time machine within a time machine and doubles within doubles, in an increasing atmosphere of existentialist paranoia and dread. More quiet thriller than sci-fi spectacle, Primer assumes the audience can keep up — at least, as much as the characters can. Not everything is solved. That’s as it should be, since no one knows how this tech works. Does it give you cancer? Why are they bleeding from the ears? Have they mirrored themselves so often that they no longer have a dominant hand to write with?

They don’t know. And neither do we.

You can start a half hour in and miss nothing, at least on your first drive by.

The beginning is dreadful. By 30 minutes in, something FINALLY  happens.

Wasting so much time tested me sorely, and I had to skip ahead while the characters talked about…well…engineering tech. At first I thought this was some kind of garage inventor documentary I found by accident. The filmation is grainy, the characters mumble over each other, and it doesn’t even seem like a movie. I didn’t know this was an indie going in, although you get that vibe quickly. I stuck with it because someone told me it was a Groundhog Day story, and I try to watch every one.

From what I read, Writer/Director/Actor Shane Carruth couldn’t waste a second of used film (money issues), and so had to include everything they came up with. Apparently, you can hear Carruth mutter ‘Cut’ a lot, and they kept that in. Despite using every scrap of ‘found’ footage, Primer still clocks in at a very lean 78 minutes. I would have started it at 25 minutes in and just had a shorter, stronger story, bypassing four men talking shop in an garage.

And there’s a Weeble. (Remember those?) The Weeble in question doesn’t have much to do with the story, but lends an element of whimsical geekery: the ‘it wobbles but don’t it fall down’ part is based on more science than normally associated with a throwaway child’s toy. (And now I wish I still had one. Got one to sell?)

About Weebles, the Wikipedia offers, “The object must have only one position in which it can achieve stable mechanical equilibrium.” I’m going to say this is rather symbolic to the theme of Primer, but I can say that all I want and it’s not a spoiler, because this movie is inherently spoil-free.

You’ll still need to see Primer more than once

Do I know happened by the end? No.

And from Primer interviews, neither do the characters (or the scriptwriter, playing his own lead). It’s kind of the point. Rewatches of this slow burn thriller are reportedly helpful, but not conclusive. This is a small, tense, obsessive film that rewards patient repeat viewings, making great mind fodder for speculation and discussion. That’s enough of a point to me.

I think we’ve forgotten that sci-fi doesn’t have to equal space battles. Primer is more along the lines of Arrival, Pi, Cloud Atlas, The Cold Equations, and 2001. They’re not going to hold your hand or talk down to you, because…well…recursive stories can get away with being mysterious. We just have to muddle along and make our own conclusions.

Is this a Groundhog Day film?

No. It’s a time travel film, but the characters aren’t stuck in a loop. They loop and loop and loop — but it’s kind of just a habit by the end, as they increasingly get in over their heads and find normalcy far, far away.

I’m not going to watch it alone a second time. I’ll find a fellow geek to share it with so we can break it down step by step. It’s that dense. You might walk away confused in the end, but you’ll be in good company.

Feel free to add your Primer theories in the comment section below!