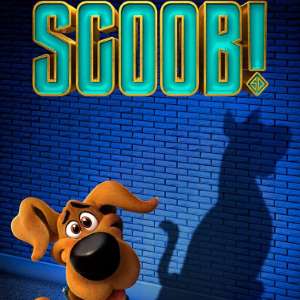 Based on the end credit scenes in Scoob!, the Scoobyverse is about to get a whole lot bigger.  Clearly, the WB intends to grow far beyond the Scooby Gang and introduce many of the old Hanna Barbera characters. Starting from the top-left we see Captain Caveman— who has a cameo in the movie. Below him is Atom Ant. It’s a little hard to make out but Atom Ant may get a gender swap from the original male character in the cartoons.

Over on the top-right we see The Great Grape Ape, but uncharacteristically he’s wearing a mask. To the lower-right we see Jabberjaw, who is basically Curly from the Three Stooges anthropomorphized into a great white shark.

We can expect to see Dr. Quest make an appearance at some point and it looks like he was the designer for R.O.S.I.E. the robot from the Jetsons.

Also seen in Quest Labs is Frankenstein Jr., a giant 30-foot tall robot created by Buzz Conroy Jr. and his father, Dr. Buzz Conroy. Maybe they consulted with Dr. Quest on their creation. We can also see the Vacuumbot over on the far right of the picture. Clearly that little guy is going to stick around. I’m guessing the Vacuumbot toy is headed for store shelves soon.

Finally, at the end of the end credit scenes we see that Dastardly and his dog Muttley are on the loose again.

chevron_left Is there anything extra during the end credits of Scoob!?
Saturday’s Panels at Comic Con San Diego 2020 – Free, Online Edition chevron_right