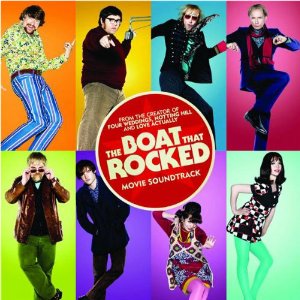 While working on the Rhys Ifans article I had an opportunity/excuse to re-watch The Boat That Rocked. I don’t need an excuse to watch it more than the couple or three times a year it currently gets. Why does The Boat That Rocked resonate so much for me? Why does it feel like Richard Curtis is following me around?

First off, what’s it about…The Boat That Rocked is the story of a fictional pirate radio station, Radio Rock. These became popular in the mid sixties. Pop music was earning the soubriquet but not thanks to the “establishment”. The BBC Light Programme was playing less than forty five minutes of pop music a day. So all the people that were putting the “ular” on to “pop” had to get their entertainment illicitly.


That illegal activity was listening to pirate radio stations which were moored in international waters. They broadcast twenty four hours a day until the stuffed shirts in Whitehall did what they could to stop it all. Incidentally, pirate radio is still going on to this day so which shows how powerful government actually is.

I got into listening to, in my case, Radio Caroline when my father had to go aboard the MV Mi Amigo. In case you think he was someone cool like John Peel, Kenny Everett, or, even, Spangles Muldoon, he was actually a marine radar engineer. He worked for a company called Decca Radar who had  a marine navigation system that could pinpoint the position of a ship to within a few metres wherever in the world it was.

This was important to the pirate broadcasters as, if they came within British territorial waters, they fell under the extant laws. My father had to go aboard to fix the navigation system. That way they knew where they where and could stay safely in international waters. When he returned he’d been given a load of promotional materials which kindled my interest in pop music, pirate radio, and freebies!

Anyway, The Boat That Rocked is set aboard a ship out in the North Sea that is operating as a pirate radio station, Radio Rock. On board is a motley group of characters: Quentin (Bill Nighy) runs the station, The Count (Philip Seymour Hoffman) is a brash American DJ loosely based on Emperor Rosko, “Simple” Simon Swafford (Chris O’Dowd) modelled on Tony Blackburn, Angus “The Nut” Nutsford (Rhys Darby) based on John Dicks.

I Can See Your Nuts, Nutsford

There are also the news and weather guy (Will Adamsdale), studio techs (Tom Brooke, Ike Hamilton, Tom Sturridge), and Katherine Parkinson as Felicity the cook who is only allowed to live on board because she’s a lesbian.

You can see representations of all manner of the sixties DJs that started out as pirates but then became “respectable” by joining the BBC when they gave up the fight against pop music and established BBC Radio 1. Some of them are still going strong even if advancing years have found them moving to BBC Radio 2 or the regional stations.

Life aboard the ship is portrayed exactly as you’d expect; drinking, drugs, smoking, silly games, and general stupidity all played out to a soundtrack of the latest music played very loud. It has been seen many times before but not necessarily on a boat. It’s a portal of late teenage/early twenties young people that is quite accurate. Reminded me of my college days, at least.

We Have Their Testicles In Our Hands, Twatt, And It Feels Good

All this sin and degeneracy is what is causing such offence in corridors of power a.k.a. Her Majesty’s Government of the United Kingdom of Great Britain and Northern Ireland. This is embodied by Sir Alistair Dormandy (Kenneth Branagh) and his assistant Dominic Twatt (Jack Davenport).

I presume that the “Carry On” type humour was meant to be extended to Sinead Matthews’ character “Miss C” but her full name of “Miss Clitt” is only revealed in a deleted scene. The characters are played as though they are Conservative members of parliament. The reality is that the government at the time was a Labour one; Dormandy is based on the then Postmaster General, Tony Benn.

But while I vaguely remember the politics of the era, what grabs hold of me and pulls me right back to the sixties is the music. It wasn’t just The Beatles and The Rolling Stones. It was also The Kinks, The Seekers, The Turtles, The Who, Jimi Hendrix, Procol Harum, Dusty Springfield, The Beach Boys…the list goes on and on.

Here’s A Rather Long Record. I Hope I’m Here At The End Of It.

Nowadays they all sound like cute, old fashioned, innocent tunes from a bygone age. Back then they were were dangerous, cutting edge, and what you simply had to listen to if you wanted to be cool. However, I think describing someone as cool dates me more than anything else. But it was that perception of being ‘dangerous’ which lead to HMG taking such strict measures. Maybe not as strict as portrayed in the film…

It was the way that the listeners listened that brought a smile to my old, wrinkled face. Little portable transistor radios carried around everywhere. Batteries used to cost a small fortune. My mother always told me that they would last longer if I didn’t play my radio too loudly. That was probably true but I think she just may not have shared my tastes.

I Have Somewhere Else To Go But It’s Peckham

Incidentally, there is a recut and bowdlerised version released for the USA market under the name Pirate Radio. The differences are slight but tend to be slightly confusing. For instance, Carl and Marianne’s reunion is moved in the timeline to a point when some of the drama was diminished. The stag night pub crawl is cut out altogether and replaced with a less amusing on board party. There is also a scene where the cover of Jimi Hendrix’s Electric Ladyland is recreated. The American fear of the female nipple meant it was shot with all the women wearing tops.

So it is probably a case of if The Boat That Rocked, is one of those films which reminds you of, as Shakespeare put it, your salad days of youth and innocence then you will enjoy it.  The sounds, the clothes, the hair cuts, the dance moves, were all spot on. I still remember my first pair of chisel toe shoes; I wasn’t allowed winklepickers…