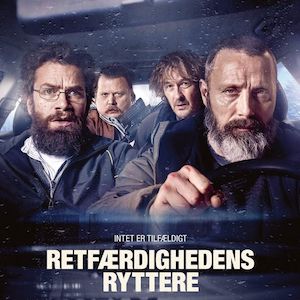 I have to admit to a bit of a man crush on Mads Mikkelsen; I just find him fascinating to watch. Partly because of his grace and physicality (he originally trained in gymnastics and ballet) but mainly because you can never tell from his face whether he’s going to be a good guy or a raving psychopath!


You’re Not Dead Inside. But You’re Chubby.

So when Riders Of Justice popped up in my feed of new offers, I did what I usually do. I had a read of the synopsis, watched the trailer, and decided, in this case, to buy it. I thought it’d just be one of those films which I watch without worrying about getting a couple of hundred words about.

But then miracle of miracles! It dawns on me that there is a valid reason for me to write about it…it’s set around Christmas! Now Riders Of Justice falls mainly into the “a film set at Christmas rather than a Christmas film” camp, but it would be disingenuous to say it is wholly without festive input.

Riders Of Justice is centred on coincidence and connections. It starts with a priest and his niece looking at bicycles being sold on the side of the road in Tallinn, Estonia. For Christmas, the niece wants a blue one rather than the red one that’s available and so the shopkeeper says he’ll order one.

Next scene is a blue bicycle outside a station. A van pulls up, a chap jumps out, takes a portable angle grinder to the chain, and throws the bike into the back of the van and drives away. Looks like the niece will be getting her bike after all!

Stay Away From The Wires!

Next scene is Markus (Mads Mikkelsen) dressed in army fatigues and somewhere hot, probably Afghanistan. He phones home to speak to his wife, Emma (Anne Birgitte Lind) to pass on the bad news that they want him to stay on for another three months. This just makes things worse for Emma as the car won’t start and daughter Mathilde (Andrea Heick Gadeberg) is already late for school.

So, being a bit fed up, Emma decides that she and Mathilde are going to have a girly skip day and go into town. Otto (Nikolaj Lie Kaas) has just been sacked from his job; he’s a mathematician and has developed a formula which analyses connections and predicts the future…well, it might do if it worked.

Otto notices a heavily tattooed man further along the carriage. He also notices another man who acts suspiciously. The suspicious man gets off the train just as Emma and Mathilde get on board. The train is packed and Otto gives up his seat to Emma. Within seconds the passenger train collides with a stationary goods train ripping out the side and killing everyone sitting there.

Otto decides that this is not an accident and joins up with his misfit friends, Lennart (Lars Brygmann) and Emmenthaler (Nicholas Bro) to gather evidence which they take to Markus to recruit him to wreak revenge on the Hell’s Angels gang known as Riders Of Justice. I’m not going to say any more because that would involve too many spoilers. All I will say is that the end of the film takes place on Christmas Day which brings us nicely into the “a film set at Christmas” arena.

Is it worth a look? Definitely! Mind you, I’ve already said I’ll watch Mads Mikkelsen in anything. It just so happens that in this case he’s a, presumably but not stated, special forces soldier and pulls off the action scenes with aplomb. As well as the action he also conveys the still inner calm and torment of someone who’s been places and seen things that most of us, fortunately, never have to see.

I’m ashamed to say that I’m not desperately familiar with the stars of Danish cinema, but all the cast were excellent and I’ll look out for more from them. Particularly Nikolaj Lie Kaas who has appeared in four other feature collaborations between director Anders Thomas Jensen and Mads Mikkelsen. The others being Flickering Lights, The Green Butchers, Adams Apples, and Men & Chicken.