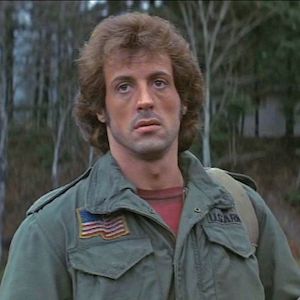 Whenever you hear of a film with Rambo in the title, you’ll no doubt think of wall to wall violence, tidal waves of blood, and a soundtrack consisting mainly of gunshots, screams, and explosions. You may also think of bulging biceps as Rambo hauls back on the string of a bow so he can pick off the enemies that are too far away to stab and he’s after a bit of peace and quiet. In short, you’ll expect a double-digit kill count.

So why was the first film totally different?


In the same way that Star Wars has been retrospectively retitled Star Wars: A New Hope (Episode IV), so First Blood is sometimes known as Rambo: First Blood. While the Star Wars saga was originally planned as a nine-part epic chronicle, even if only in George Lucas’s head, the 1972 novel by David Morrell was only ever meant as a single, standalone story.

Well, killing off the main character usually guarantees that particular outcome. So a few tweaks to the ending later, the main man survives and a franchise is born.

John Rambo Is A Vietnam Vet. He’s A Green Beret.

Possibly the single most defining feature of the Rambo franchise is the star, Sylvester Stallone. Stallone is best known for just two roles; John Rambo and Rocky Balboa. He’s played other parts but most people would struggle to name any other character he’s played. The nearest would be the bloke he plays in the Expendables series of films but I had to look it up to see that he was called Barney Ross. He’s played more parts and made some good films, but Rambo and Rocky both cast long shadows.

So the thought of anybody else playing the title role is unthinkable, surely? It is totally inconceivable that anyone else could even have been considered…yes? Well, actually, no. At the time, the only success that Stallone had had, had been the Rocky films. Everything else had bombed; they even, indirectly, referenced Rocky on the poster…”This time he’s fighting for his life”.

Considered to play John Rambo, over the years, were Brad Davis, Jeff Bridges, Robert De Niro, Michael Douglas, Paul Newman, Ryan O’Neal, Chuck Norris, Kris Kristofferson, Clint Eastwood, James Garner, Steve McQueen, Nick Nolte, Al Pacino, John Travolta, and Dustin Hoffman! There may be more that I haven’t spotted but that gives you an idea. Some seem more likely than others but the one I would have liked to see would be Dustin Hoffman. I can see him playing the oppressed, tormented Vietnam veteran who snaps. Sadly he turned it down and made Tootsie instead.

At the beginning, I said that there were differences between First Blood and the rest of the franchise. The first one is the thing that most people forget…the body count or, rather, the lack of it. First Blood sees only one onscreen death: Deputy Arthur Galt (Jack Starrett) and, if we’re honest, it’s dubious to say that Rambo actually killed him. Galt undid his seatbelt to try and get a better shot at a helpless Rambo. Rambo throws a rock, the helicopter pilot flinches, and Galt falls out to his death.

Can You Tell Me If Delmar Barry Lives Here?

The only other deaths are some Dobermans that were sent to track Rambo, and soldiers that served with him in Vietnam. One is described by Stallone in a scene of really, very good acting; when he is telling his old commanding officer, Colonel Samuel Trautman (Richard Crenna), of an incident involving a booby trap, The other one was the reason for Rambo being in town in the first place. He came to meet up with Delmar Barry only to find that he had died the previous year from cancer due to exposure to Agent Orange in Vietnam.

While First Blood has oodles of violence there are, actually, very few deaths and only one can be attributed to Rambo and that’s a bit tangential. Oh…that’s human deaths; there are three dogs to be considered. Rambo is very much a vulnerable, scarred human being who reacts badly to a bully; Sheriff Will Teasle (Brian Dennehy). It’s one of those things that hasn’t aged well. Teasle takes against Rambo because of his long hair and scruffy appearance but, to my eye, he seemed perfectly presentable. Maybe not ready for a job interview but his hair is neater and better styled than mine!

So why is First Blood in our Non-Christmas Christmas round up?

Quite simply, because it is set during the Christmas holidays. When Rambo is taken to the police station there are cards and decorations dotted around and there is also a tree in the background. And, well, that’s it! The way the story develops it has to take place during winter, but it doesn’t have to be around Christmas. It could be set on Valentine’s Day and there wouldn’t be any difference whatsoever. So this is a really low bar example of a Non-Christmas Christmas film. We’re only mentioning it because RunPee fans can be completists. 😉

Still, to my mind, First Blood is, by far, the best of this particular franchise.

chevron_left Is there anything extra during the end credits of The 355?
RunPee Weekly Newsletter #96 (January 12th, 2022) chevron_right