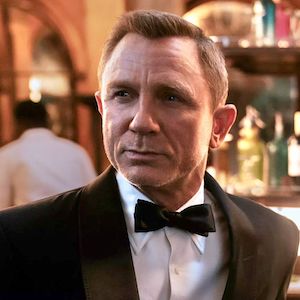 Elsewhere there are my initial thoughts on No Time To Die as well as Dan’s first impressions. Maybe because we had slightly different views on Daniel Craig’s final outing as Bond I thought I’d go back and take another look. This wasn’t a hardship to me in the slightest; I knew it would be a while before I could buy a copy to watch at home so I’d loosely planned to exercise my Light Infinity card and go back for another look anyway. As well as being a fan of the franchise I knew that I had missed a few things the first time around because I had to have at least one eye on events from a RunPee point of view! Besides which, detail-heavy films like this one, Tenet or, taking another dip in the Nolan pool, Inception usually benefit from at least one more watch. So was there anything I saw this time that I missed the first time around? You’ll have to read on to find out.

Obviously, from this point forward there will be spoilers, so if you haven’t seen it yet, and don’t want to spoil it for when you do…DON’T READ ANYMORE!!!

One minor difference that the Daniel Craig era has maintained throughout its run is that you are never sure when, or even if, there’ll be the iconic barrel walk. No Time To Die features not one but two! The first is where you’d expect it… right at the start. However, there’s no blood effect running down following the shot. You can look on the internet for the various philosophies behind the missing gore; personally I never even noticed it the first time! Towards the end, though, there is a real life version. Bond walks into the opening at the end of a round tunnel and suddenly takes a snap shot  right down the middle. Is it a carbon copy of the iconic opening? No! But it definitely rings the appropriate bells.

Other things to look out for include a prop gag in the first half of the opening sequence. Teenage Madeleine’s mother is under the influence of various mood altering concoctions and spills a drink. Madeline goes to the kitchen to get some cleaning equipment. She opens the cupboard under the kitchen sink and, strapped to the side of the cupboard is a gun. A few minutes later, Safin arrives and Madeleine runs to a safe room but can’t get in to it. After Mrs White meets her loud and messy end Safin decides to check the house. A long shot, through the open cupboard, shows that the gun has gone. It made a lot more sense the second time around as, first time, I assumed the child kept a gun in her bedroom!

Did You See That?

There are also some “blink and you’ll miss them” details which you might not spot during the first viewing; I certainly didn’t see all of them and I’m not sure that there aren’t more to spot when I see it a third, fourth, and, indeed, nth time! For instance, Judi Dench’s M bequeathed an horrendous ceramic bulldog to Bond in Skyfall; this appears in a box in the lock up garage where he keeps one of his many Aston Martins. Also, as the action moves around the security service headquarters there are glimpses of portraits of M’s past: Judi Dench, Robert Brown, and Bernard Lee. Another nice touch was on board the Boeing C-17 Globemaster III that’s been kitted out by Q to allow him to prepare Bond and Nomi for the assault on Safin’s stronghold. He opens various drawers showing everyone many items of specialist kit. With an “oops” Q quickly opens and closes a drawer containing… a porcelain tea pot, with matching cups and saucers. Well, it is the British Secret Service!

Over the last, almost, half century much has been made of the sexual antics of James Bond. The last fifteen years have seen a marked reduction in those shenanigans so how was retirement age Bond managing in the trouser department? To start with he’s driving off into the sunset with the woman he met in Spectre, Dr Madeleine Swann (Léa Seydoux). They seem happy enough… bit of bother around various exe’s but that can be sorted… surely? There’s a throw back to when Bond was married back in On Her Majesty’s Secret Service; a sunlit car ride, she asks to go faster and he says “we have all the time in the world” and the theme from On Her Majesty’s Secret Service plays. So does this mean they’ve settled down? Are they all but a signature away from being married? I thought that was the case, and, with Madeleine knowing she’s carrying Bond’s child, so does the fair doctor. Does she know she’s pregnant though? I have to say “yes”. During the scene when Bond puts her on the train and says goodbye she touches her stomach. Now I know that it’s not as reliable as peeing on on a stick but, in the world of films, it’s more accurate and the rabbit lives!

Other differences with previous incarnations of Bond could be attributed to the acknowledgement that this one is knocking on a bit. In reality, Daniel Craig wasn’t the oldest representation of Bond but he had the emotional intelligence to let the character age and, inevitably, retire. So perhaps his increased control of his libido is down to age? As a gentleman of advanced years I can assure you that it does happen. Perhaps that is why his interactions with women are more muted? Civility but no flirtatiousness with Moneypenny and professional rivalry with Nomi; previous Bonds would have been in there like a rat up a drainpipe, as the saying goes.

Just A Slight Stiffness Coming On…

Oh, the other quasi-sexual thing of note… is Q gay? When Bond and Moneypenny crash his flat and get him to analyse the memory stick that had been through Obruchev’s digestive system, he’s obviously setting up for a quiet dinner à deux. Dim lights, relaxing music, nice wine, best tableware, and something home made in the oven; a romantic evening was obviously being suggested. So the exasperated “he’ll be here in twenty minutes” suggested to me that it was not a double glazing salesman on the way round. Putting the Q into LGBTQ+, perhaps?

One of the things that was not so much a bone of contention but a definite difference of opinion during the RunPee Giant James Bond Rewatch was the level of humour. Jill was a big fan of the high camp and low comedy of the Roger Moore and Pierce Brosnan eras whereas I favoured the more gritty Daniel Craig and Timothy Dalton efforts. That doesn’t mean though that there was no humour during the Daniel Craig iteration of the character… there were some genuinely funny lines in No Time To Die.  For instance, during the scene mentioned in the last paragraph Bond gives Q a USB memory stick and asks him to check out the contents. Q says “Do you know where this has been?” and he is referring to the security aspect of the files contained on the stick. What the audience knows, and Bond probably suspects, is that Obruchev most likely got it back with the aid of a sieve and a shower hose while crouched over the toilet pan…

Do You Expect Me To Talk?

What has been a staple of the whole franchise is the humorous quip.  From “I think they were on their way to a funeral” delivered to the burning hearse the bad guys were driving in Dr No, via the Roger Moore years when they reached the nearest they could to being a selection of lines taken from seaside postcards; “Keeping the British end up” and “I think he’s attempting reentry” being the most cringeworthy attempts. The Daniel Craig era did still have some humour sprinkled through the script; it was just a wee bit less heavy handed. No Time To Die had quite a few amusing lines…

At one point Bond is shown in to see M while Nomi has to sit outside the office and wait.  This is just after a minor power struggle between the former and current 007’s and Nomi is a bit miffed. Nomi and Moneypenny are chatting –

Nomi: I get why you shot him.

Moneypenny: Well, everyone tries at least once.

A nice twist to the old catchphrase and the last time Daniel Craig gets to say it.

chevron_left Is there anything extra during the end credits of The Eternals?
How I Became An Independent Film Reviewer chevron_right