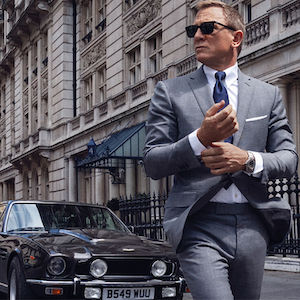 Let me say up front that I really enjoyed No Time To Die. At least, I loved parts of it; the most important part: Bond. I want to make that clear because what’s going to follow will make it seem otherwise. I’d recommend to anyone who likes action movies that No Time To Die is a must-see and one of the better Bond movies, but not nearly the best.

I really wish I had taken the time to rewatch all of the Danielle Craig Bond movies before going to see Craig’s finale. Or, at the very least, Spectre, of which I remember very little. This movie would have made a lot more sense if I had refreshed my memory about the character and story arcs. I foolishly thought this movie would stand on its own.


There Be Spoilers Ahead

I’m going to pick apart the plot of this movie, or lack thereof, so you’ve been warned. You probably don’t want to read further until after you see the movie.

Why does Bond assume that Madeleine had something to do with the explosion at Vespa’s tomb? There are plenty of people who want to kill him. It doesn’t take an evil genius to think of planting a trap for him at the tomb of a lost love. Yes, Madeleine encouraged him to visit the tomb, but that doesn’t make her an accomplice, as Bond later discovers.

What is Madeleine’s big secret? Is it supposed to be the events of her childhood—the opening of the movie? Why would that be a secret at all? We don’t know what happens after Lyutsifer Safin saves her from the ice. Presumably, they never have contact again until he shows up at her office. For part of the movie I thought they were insinuating that Blofeld was her father. Now that would have been a cool secret. But it became clear that wasn’t the case because Madeleine delivered the nanobots that were meant to kill Blofeld. If she had been related then they would have killed her. At least that’s what I got from the exposition of how the nanobots work.

Here’s one that really confused me: as the movie begins Bond is living on an isolated beach. Then Felix shows up and shortly afterward the new 007 is introduced. So it would seem that Bond was off the grid but then the CIA and MI-6 find him at the same time? Because when Bond visits Malory the first time M says something to the effect that they thought he was dead. It’s not really that important, but it’s just sloppy storytelling.

What is the relationship between Blofeld and Lyutsifer Safin? Was Blofeld involved in killing Safin’s family?

I had to read the Wikipedia article about this movie to figure out that Blofeld was behind the heist of Project Heracles. Because it’s really not super clear in the movie. The main henchman, Cyclops, is never seen with his master so it’s not entirely obvious who he’s working for. In the end we discover that he was working for Blofeld to start with but switches to Safin after Blofeld’s death. That’s just weak sauce if you ask me.

At Blofeld’s birthday party in Cuba, Cyclops has the Russian scientist (Valdo) program Heracles to kill Bond. But Valdo switches the USB drive and instead programs it to kill all of the Spectre guests. At the time it seems like that was done for effect so that the audience can see how horrible Heracles is. But I suppose Safin wants to kill Spectre agents, although I’m still not clear why. Unless Spectre had something to do with the death of Safin’s family. Which still isn’t clear.

What was Safin using Heracles for?

Project Heracles could be programmed to kill anyone by identifying their DNA. For instance, the perfume that Safin gave Madeleine had nanobots specifically programmed to kill Blofeld. And the nanobots used in Cuba were specifically programmed to kill Spectre agents—I suppose. But then what was Safin’s ultimate goal? We saw the simulation where people around the world were spreading the nanobots and huge numbers of people were dying, but what people? Were they targeting specific people or a specific ethnicity? Who? Just before new 007 killed Valdo he insinuated that he could wipe out all black people. Then she kicked him into the acid. Speaking of which, what was the acid for? That made no sense but I guess it’s not a Bond movie without a vat of acid at some point.

Also, Blofeld is the one who orchestrated the theft of Project Heracles. So what exactly was Safin doing on his island all this time. Clearly, he’s been there for a very long time preparing for something. But without Heracles he’s pretty much powerless to do anything evil on a massive scale and I still don’t know what his motivation/goal is.

Safin made a big deal out of abducting Mathilde, but then he just let her go with a shrug? What was that all about? That’s not very Bond-villain of him. It feels like the writers wrote themselves into a corner. The story dictates that Safin has Mathilde so that Bond and Madeleine are motivated to go after him. But then they get to a point and think:

Now what? We have to get Mathilde back to Bond and Madeleine and we can’t make a movie where an innocent little girl suffers at the hands of the villain because that won’t go over with the audience. So how do we get Mathilde away from Safin? Oh I know, he just lets her go because that’s apparently how villains work today.

This is what bothers me the most. Madeleine distinctly tells Bond, “She’s not yours.” And then they go on about her blue eyes in many different scenes. As the audience, we’re left wondering: is Madeleine lying or…? Even Bond isn’t sure. We never get a serious moment where Bond can unequivocally embrace Mathilde as his daughter.

How on earth could the writers screw this up? The opportunity for Bond to have a child to fight for, and sacrifice himself for, is huge. Imagine if Madeleine instead introduces Mathilde as his daughter and then we get to see a little awkwardness as Bond tries to come to grips. Then, when Mathilde is in danger, we get to see a side of Bond that we’ve never seen before: protecting his child. He’s always very calm as he dispatches even the most ruthless henchmen. How cool would it be to see Bond go into complete get away from her you bitch mode on some villain to protect his daughter?

I just don’t understand how the greenest scriptwriter couldn’t hit that out of the park.

Why Did Bond Sacrifice Himself?

I get the drama of the situation. He’s been infected with nanobots that will kill Madeleine or Mathilde if he ever comes in contact with them. But he’s also on a deserted island. He could have just as well lived out the remainder of his life in comfortable isolation, not much different than the life he had on the beach in the beginning, albeit a little bit colder—a nice bookend. He’d be able to watch his daughter grow up via Zoom. It’s better than, you know, the alternative.

There’s ample opportunity for catharsis as we finally see Bond with an opportunity for a family, but denied ever having contact with them. That’s more poignant than a quick death.

I know the nanobots are a MacGuffin—a tool used to advance the plot. But Q distinctly says that once you get them on you there’s no way to get them off. And that’s cool. I can roll with that because that’s what they need the MacGuffin to be. But Q is a super tech-genius. It never occurred to him that a magnet would do the trick?

Ultimately, I got what I wanted

The Bond scenes and action are top-shelf. But the plot and villain scenes felt like they were quilted together from random clippings cut from other Bond movies. Not only unoriginal but unintelligible. At least the writers, and especially Danielle Craig, delivered when it mattered most. That makes grading this movie a tug-of-war between what works and doesn’t. I’m going to cheat.

Grade: A+ for the Bond parts; D for everything else.

I think the movie title is missing a comma. It should have been No, Time To Die.