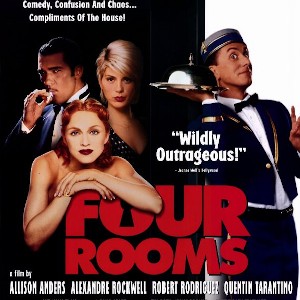 There’s no mistaking Four Rooms for anything other than a New Year film… it actually starts to the strains of Auld Lang Syne! Basically, Four Rooms is a quartet of stories set in the Hotel Mon Signor on New Years Eve. Each segment is directed by a different director with a, mainly, different cast. Running through the different sections is the sole on-duty bellhop, Ted, played by an impossibly youthful looking Tim Roth.

Very briefly the four parts start with “The Missing Ingredient,” directed by Allison Anders. A coven of witches gather in a room to perform a ritual to raise the goddess Diana, but it turns out that a vital ingredient is missing. That ingredient has to be provided by a man so… enter Ted.


Next is “The Wrong Man,” directed by Alexandre Rockwell. Ted gets caught up with a very odd couple, who are in the middle of a very unusual evening.

Then there is “The Misbehavers,” directed by Robert Rodriguez. A suave couple decide to go out, leaving their children in the hotel room, and task Ted with keeping an eye on them.

The final part is Quentin Tarantino’s “The Man From Hollywood,” which is a reworking of a Roald Dahl story “The Man From The South”.

I’m In A Situation I Can’t Begin To Explain

The four directors of Four Rooms can be split into two groups… the ones that made it big (Tarantino and Rodriguez) and the ones that, well, didn’t (Anders and Rockwell); all four are still working, but some are causing bigger waves than others. The fact is though that, at the time, all four were the bright young things of cinema, which makes its original reception a good reason to avoid it — which could have been one of the reasons why I’ve never seen Four Rooms before.

Well, now I know not to listen to critics and reviewers! I really enjoyed it. Admittedly there were low spots, but there were far more high spots. The main low spot was the first segment, “The Missing Ingredient” and that wasn’t particularly low. The whole thing smacked of a film script written by a spotty adolescent who was desperate to get some bare breasts to look at. The star of the segment is Madonna as Elspeth the lead witch, but she just plays Madonna. The second section, “The Wrong Man”, is better… much better. It does keep you guessing which way it’s going to go right the way through. Incidentally, this section features Jennifer Beals as Angela, the only character to appear in two segments. Other than Ted, of course.

How Can I Stop Talking About Something That’s So Huge?

But it’s the second half that really gets going. Robert Rodriquez kicks off with “The Misbehavers,” which features his favourite actor Antonio Banderas. OK… so Antonio Banderas just plays Antonio Banderas, but this is the Antonio Banderas that we’re used to seeing on screen; handsome, suave, debonair, sophisticated, charming, and just a shade like Dick Dastardly! Throw into the mix his mischievous children Sarah (Lana McKissack) and Juancho (Danny Verduzco) who are brilliant as the squabbling misbehavers of the title. I don’t know for sure, but my guess is that the success of this section gave Rodriguez the confidence to work with kids again on the Spy Kids series.

And the final section of Four Rooms is “The Man From Hollywood” — which just screams Quentin Tarantino!

It has humour and wit in spadefuls, neat character interactions, and other Tarantino trademarks… the long opening take, Big Kahuna brand drink cups, regular and frequent uses of ‘fuck’ (193 times in twenty one minutes), and the same car that John Travolta drives in Pulp Fiction. Oh… the Red Apple cigarettes appear in the previous section. And, of course, QT himself appears too, but this time he’s really good. His other cameos tend to make me think that he only got it because he was sleeping with the director. Not only is his acting good, but the directing is fantastic too. The tension is built up during the segment and relieved unexpectedly, but with hilarious results.

If you laughed during the way Brad Pitt wraps up Once Upon A Time In Hollywood, you’ll love the end of this.

But the best — by far — aspect of the whole film is Tim Roth. It must only be because he’s such a fine dramatic actor that he doesn’t do more comedy work, because he nailed the part of Ted. Comic timing, daft expressions, and slapstick pratfalls: all pulled off to perfection.