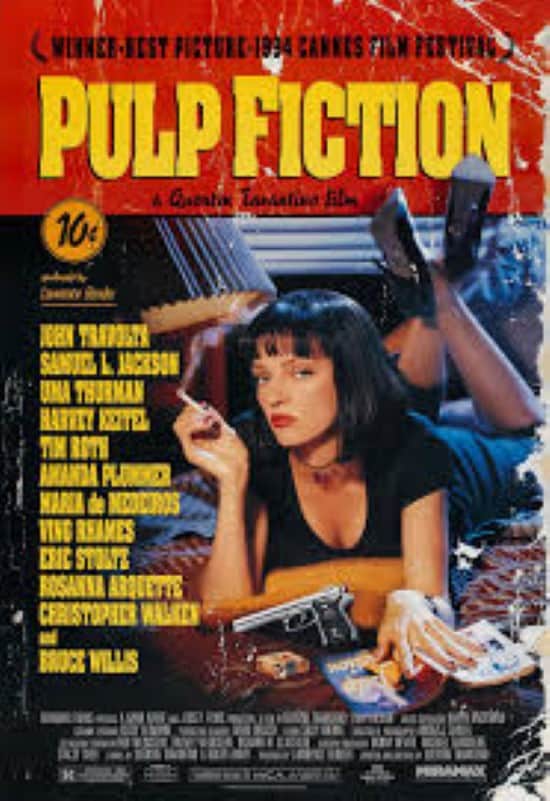 Tarantino just released his ninth film, Once Upon a Time…In Hollywood.  The movie follows the lives of fictional characters actor Rick Dalton (Leonardo DiCaprio) and his stunt double Cliff Booth (Brad Pitt), and real life actress Sharon Tate (Margot Robbie), in the days before the Manson Family murders.  The movie debuted in second place behind The Lion King, and is receiving rave reviews. Now is the perfect time to review the director’s catalog and suss out the essential Tarantino films.

Tarantino’s first film premiered at Sundance in 1992, and was picked up by Miramax.  The film also played at Cannes. The story concerns a group of bank robbers reconvening after a bank heist gone wrong, to figure out what happened.  The movie introduced several staples of Tarantino’s work, including pop culture references (the Madonna debate in the opening scene), long scenes of dialogue (including the opening scene), profanity, extreme violence, a story told out of chronological order, and a hip soundtrack.

The movie features three actors Tarantino is fond of working with: Harvey Keitel, Michael Madsen, and Tim Roth. The title doesn’t have a specific meaning. It just sounds cool.

When Tarantino returned to Cannes in 1994, he was a star.  He had a following, and anticipation was high for his new film Pulp Fiction.  Inspired by pulp novels, the movie weaved together the tales of several criminal figures, including two hitmen (John Travolta and Samuel L. Jackson), a corrupt boxer and his girlfriend (Bruce Willis and  Maria de Medeirios), a gangster’s girlfriend (Uma Thurman), and two robbers (Tim Roth and Amanda Plummer)….among others.

This is the director’s most essential work, and the film against which all his other movies are judged.

The last quarter of Four Rooms

Four Rooms is kind of a “throw away” film.  It was a fun anthology where four directors each got to direct a quarter of the flick.  To illustrate how forgettable the movie is, I can only remember three of the four sections of the movie.

Tim Roth plays a bell boy who will break all of his mentor’s rules by the time one fateful New Year’s Eve is over.  Tarantino directs the end of the flick — the last room that Roth has to deal with. This section of the movie is a remake of a classic “Alfred Hitchcock Presents” episode that originally featured Peter Lorre.

Bruce Willis, Quentin Tarantino, Jennifer Beals, and Paul Calderon play a game of poker, where the stakes go beyond money. This section of the movie is wicked fun…and if I were programming a QT film festival, I’d definitely include it.

Volume 1 is Tarantino’s martial arts film.  And Volume 2 is his first western. But together, they’re a compelling drama about revenge and its consequences.  (Tarantino has gone on record saying that he recently talked to star Uma Thurman about making a part 3 featuring Vernita Green’s adult daughter seeking vengeance against her character.)

The House of Blue Leaves sequence in Volume One is probably one of the longest action scenes ever filmed.

The change of tone in Volume Two is daring. Thurman gives a tour de force performance as The Bride.  These movies came out during a period in my twenties when I felt a lot of anger. There was something about them that was very special to me. A catharsis. Waiting for Volume Two to start was like waiting for The Lord of the Rings: Return of the King to begin.

I’ve only seen this one once, so it’s hard for me to speak of it eloquently or at length.  There is something quite satisfying in Tarantino’s rewriting of history. Violence and revenge are major themes of this film as well.  Christoph Waltz won his Oscar for this movie and he as cold blooded and terrifying here as he is lovable in Django. The tense opening scene is a breathtaking highlight.  Our review is here.

Tarantino crossed the Western and the Blaxploitation film to create this controversial picture.  Say what you will about it, but the image of the slaves’ abused ankles alone at the beginning of the film drove home the horror of slavery to me, in a way few things ever have.  I have never forgotten it. The inhumanity of it. Whatever other parts of the movie may be over the top, that stuff really happened. Christoph Waltz’s retelling of the Broomhilda legend is a highlight.

Take RunPee to the Movies

Don’t miss the best parts of a Tarantino film or any other movie.  Use the RunPee app every time you go to the movies. Especially for films that are over two hours like Once Upon a Time…in Hollywood.  We add new Peetimes every week for all the Hollywood hits. You can also keep up with all the latest movie news and reviews by following us on Twitter @RunPee and liking us on Facebook at www.facebook.com/RunPee/.

Movie Review – Once Upon a Time … in Hollywood