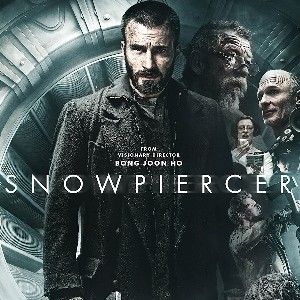 There you go with Snowpiercer; this baby ticks all those boxes.


The stellar cast includes Chris Evans, Tilda Swinton, John Hurt, Octavia Spencer, Song Kang-Ho, Ed Harris, Jamie Bell, Ko Asung, Ewen Bremner… enough for you? And while there are effects, the film is based on the only life on the frozen planet being aboard a train hurtling around the aforementioned globe — it’s not an effects-driven film. The main thrust of the effects is the world through the window, the frozen, snowbound world outside. Life inside the train is where all the action actually takes place, and that is a world of atmosphere rather than effects. Unless you count making Chris Evans, who was midway through his Captain America gig, look like he’d actually spent eighteen years living on protein jelly.

I Am A Hat

In short, the story takes place aboard a train endlessly running around the world. The world outside the train is in the grip of an ice age, caused by an attempt to ‘fix’ global warming; CW7 was the wonder substance that would lower the Earth’s temperature and reverse global warming.

Unfortunately, CW7 worked too well, hence the new ice age. But if all life had become extinct it would be a different film altogether. There’d be the sepulchral tones of an Attenborough (David, not Richard) telling us of the mistakes made and the things lost as a result. So the next sound we hear after the fawning news anchors announcing how CW7 will save the world, is the unmistakable sound of a large train travelling at high speed through the frozen landscape.

Inside the train there are different classes; workers, warriors, political, slaves, and rulers. How all these classes established themselves isn’t addressed. There is a series based on the same story, which shows that the poverty stricken tail-sectioners forcing their way on board as the train was starting to move, but, in the film, they’re just there.

But the train has to keep moving, to generate power to keep moving, and also to provide warmth, light, food, etc. The people in the tail are treated as slaves. Their only food is a protein gel made from crushed up insects and, occasionally, heavily armed men will come down from the front, with requests such as are there any violinists or are there any children of x age and y height? Enter Curtis, who is planning a rebellion to take over the train.

You Are A Shoe

So where does the New Year connection come in? Well, the conceit is that the train circles the globe once a year, and each completion of a rotation is called a New Year and celebrated. One of the pitched battles for control of the train is briefly interrupted for the traditional countdown, and spoiler-phobia prevents me from saying how else it is used. Instead I’ll go down a different rabbit hole, the one labelled “Plot”… plot hole… get it?

Obviously I’ve been to too many pantos to think a weak joke like that would fly.

OK… I know we have the unwritten contract of the willing suspension of disbelief to work with, and we can accept that there is some form of power generation going on fueled by the forward motion. We can accept that they have nifty little universal translators.

But what I found difficult to accept was that the workings of the train looked like they were designed by Isambard Kingdom Brunel, but directed by Fritz Lang

So the engineering seems a bit off kilter, but what threw me completely was the economics of the situation. The poor are at one end of the train, the rich at the other, with the in-betweeners in-between, making sure that everything got done, which is kind of how the real world works.

However, in the real world there are things that are done to make sure the rich maintain their level of richness; stuff is made, mined, moved around, and merchandised. So how does that happen on a train?

In fact, I should imagine that as soon as that train started rolling and the world economy became extinct, any money or valuables they had would become worthless. So how did they pay for their beauty treatments, bespoke suits, and ball gowns? Oh… and that’s before the questions about where did the raw materials come from? They’ve been on that train for eighteen years — so how many cows, sheep, hens, etc. did they bring with them?

BONUS! Snowpiercer is showing on Netflix right now. Can’t be sure it still will be when you read this, but consider watching this on New Year’s Eve at the tail end of this year.

chevron_left Movie Review – Soul (Pixar and Disney get it right, again)
2020 Movie Rankings according to the Peeple’s Poll chevron_right