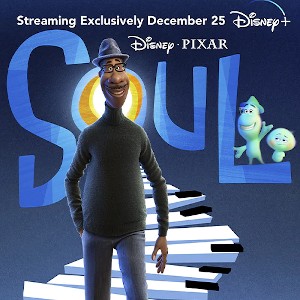 Soul is one of those films where you see a still or a short clip and you think “Aha! A children’s film; something to keep the little crotch goblins quiet for a bit.” Then you notice the Disney and Pixar names plastered all over it and, that’s it… it’s a kid’s film. But then something starts to niggle away at the back of your mind, isn’t there a theme to the output from those two, and you start to have second thoughts…

Let me think about the Disney/Pixar output… Coco, Up, Onward, Inside Out… these are all about death, dying, or depression!  What’s Soul going to be about? Turns out it’s a mix of all three. So is it still suitable for kids? Turns out the answer is yes… but be prepared for awkward questions.


You Can’t Crush A Soul Here

Soul is a classic “be careful what you wish for” story. Joe Gardner (Jamie Foxx) is a disillusioned part time music teacher. Well, at the very beginning he is, but he gets offered a full time post, but he doesn’t want to take it as his first love is performance, especially in jazz clubs.

Incidentally, speaking as a former teacher, I have to say that that feeling is understandable; I was told many years ago “never try to teach a subject that you love as you’ll just end up hating it!” Out of the blue he gets the opportunity to audition to play with Dorothea Williams (Angela Bassett), thanks to a former pupil recommending him. He says the fateful words, “I would die a happy man if I could perform with Dorothea Williams,” and rushes across town, plays for her — and then has a fatal accident on the way home — and we haven’t reached the opening credits yet!

Then this little blobby thing with his hat and voice appears on an upward heading moving walkway, heading to the Great Beyond. This is when he proves that he wouldn’t die a happy man after playing for Dorothea, and his determination to play, allied with his sense of the injustice of it all, makes him fight his way back — except he goes the wrong way and ends up in the Great Before, where souls are made ready for their trip down to Earth and adoption into newborn babies. Here he meets 22 (Tina Fey), who is a happy little soul, as in happy to be doing what she’s doing and not ready to be going to Earth any time soon.

That’s What Life On Earth Is For

And so begins the middle sector, which is inevitably the funniest in my experience of these films. That doesn’t mean the rest of the film is dull… not by a long way. It’s just that this section is when, I’m guessing, they let Tina Fey have her head, and Jamie Foxx joined in and kept pace with her brilliantly. I know it’s not the way they do it, but I had visions of Tina Fey and Jamie Foxx in a room just ad libbing away, while the animators are scribbling furiously and the script writers are quietly sobbing in a corner.

So 22 explains why she doesn’t want to go to Earth, and how she’s broken the spirits of so many mentors in the past, including Nicholas Copernicus, Mother Theresa, Muhammad Ali, Steve Jobs, and Aretha Franklin. Then comes the inevitable accident, which sees Joe and 22 back on Earth, but needing to get back and sort stuff out. This is around the point where anything else I say will be deemed a spoiler and I’ll be dropped into spoiler clink — so I’d best stop.

What I will say though is that the usual Disney/Pixar formula is working at full capacity and, while there are plenty of laughs along the way, be prepared to have the tissues to hand. Also, while it’s something that international audiences might not spot, I did enjoy hearing the ever wonderful Graham Norton (MoonWind) and Richard Ayoade. (one of the counsellor Jerry’s… watch it and see!)

chevron_left Is there anything extra during the end credits of News of the World?
New Years Eve Movie Rewatch Review – Snowpiercer chevron_right