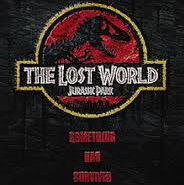 While enjoying a lovely pint of hand crafted mead at the San Diego Bronto Brew Meadery, I got to view a free social rewatch of the entire Jurassic oeuvre. With Jurassic World 2: Fallen Kingdom opening in the US this week, that’s five fun movies. Or, well, some fun movies and one that sucked (Hi, JP III).

While it’s got it’s detractors, [pullquote]The Lost World is a decent film, the second best in the series. It has a real plot that’s explored organically, with good characterizations, and some intensely riveting dino action. [/pullquote]  Its main problem is that it can never be as tightly gripping or simply magical as the original. And it still has the goofy kid sequences that plague the franchise. But let’s talk about what we liked.


How about that RV scene? You know the one. Dr. Ian Malcolm (Jeff Goldblum, playing Jeff Goldblum), not quite as dead as supposed, talks about the running and the screaming to follow. He’s in that turbo-charged Tech RV ( I WANT ONE) that a T-Rex couple industriously push off the side of a cliff. The humans did, as humans do, something incredibly stupid with the baby T-Rex, and now the parents need to rid their territory of the pesky people, in the most dramatic way possible.

[pullquote position=”right”]The scene where Sarah lands on the RV window above the crashing coast is the singular iconic moment  in The Lost World.[/pullquote] Never mind that someone with her education makes every  mistake from the Megafauna 101 class…at that moment, we’re with her,  holding our collective breaths, as the glass cracks spider outward. Brrr. Good scene. Silly stuff aside (these guys can’t hold that wet, muddy rope in their bare hands, much less

climb it, but whatever), it’s a stirring sequence. When poor Toby from the West Wing dies horribly we wince, and then cheer when the previously antagonist hunters lends their literal hands to save our guys. It’s all the people against the dinosaurs from this point on.

There are chases, there are deaths. The chicken-sized Compys strike back against an arrogant human, and our unfortunate paleontologist dies a nasty death, somewhere between a snake bite, a waterfall, and one big set of jaws.

Things go pretty good, story-wise, introducing the Raptor area (cool shots of humans being hunted in the tall grass)…and then things start getting wacky. The gymnastics scene is obviously nuts, but the worst offense of The Lost World are the scenes on the ship and in San Diego.

One:[pullquote] If the T-Rex is still contained in the cargo bay, how come the bridge crew was eaten? No matter how many times I watch this, I still don’t understand how we’re supposed to believe this happened.[/pullquote] There’s a hand gripping the steering wheel and no body…all while the large animal in question is contained. Below decks. Is there an invisible Raptor onboard?

There’s a scene showing how the T-Rex breaks out of containment after the ship crashes, and goes looking for drinking water (a pool) and food (poor doggy). I live in San Diego, and I don’t think they bothered to actually film down here. There’s some more unrealistic sequences of a hungry T-Rex “downtown” chasing trolleys, flinging cars, snacking on unfortunate people, and running after Tokyo businessmen (okay, the Godzilla nod was cute).

The climax scene, where the industrialist is used as a hunting lesson for the T-Rex Baby is…icky in its implications. I may not have liked the man, but no one deserves to be hobbled and eaten alive. It’s one of the things I don’t like about the Jurassic films: the deaths that people cheer at are just gristly. The assistant in Jurassic World 1 does NOTHING to deserve that horrific Ptherodont/Mosasaurus duo nightmare.  Did she have a villain scene left on the cutting room floor?

And Toby is split into two pieces in Lost World, while being a selfless hero. I guess I’m supposed to find it funny in Jurassic Park Classic when the “bloodsucking lawyer” gets chomped on the loo, but seriously, that’s some awful sh!t happening (no pun intended). I don’t know why that’s played for laughs.

I get it, people die when man meets beast. But I don’t feel good laughing about it. These films walk a thin line at times. But there I am again, talking about things I didn’t like. These movies are intended as a way to eat your popcorn and disengage the brain. These are movies where scientists are the heroes, and I very much appreciate that.

[pullquote]The things that are great: when the movies remember these creatures are animals, not monsters. [/pullquote]When we feel the magic of our youth stirred by seeing “real” dinosaurs, and interacting peaceably with them. When John William’s stirring score carries us along, and we are reminded there are wondrous things ahead of us. I hope we might be wise enough to see them come to pass. I hope we will be ready, because, as we know…life finds a way.

Note: I’m definitely impressed with how John Williams manages to recall the beauty of the first film in his soundtrack, while also setting The Lost World apart with the fanfare of an almost military theme. It doesn’t have the softly nostalgic notes of the first film, but it stirs the soul nevertheless. The man is a national treasure. Get the movie and soundtrack here: