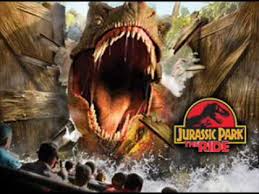 I love dinosaurs. I was a dino geek before dinosaurs were cool, and to make me stand out even further, I was a “just a girl”. Girls who were geeks in the 70s were a rare breed. Fortunately, I was also a Klingon, so efforts to bully me landed on deaf ears. 🙂 [pullquote]Hell, I was a Dinosaur-riding Klingon.[/pullquote]

This Klingon has mellowed over the years, but my fascination with dinosauria is still up there next to my now-mainstream fangirl delight in Harry Potter, Marvel, Lord of the Rings, Star Wars, and yes — Star Trek. This brings me back around to dinosaurs.

I went to Universal Studios this summer for ONE reason: to proudly wear my Gyffindor student robes, and be selected in the wand choosing ceremony.  And drink Butterbeer. OK, this is more than one reason but it’s all about Harry Potter. And you can read about my amazing HP day in this article (link and photos to be added).

After a long day at Hogsmead Village, my travel companion was looking a little googly eyed, and suggested we do something else in the park. We headed down 1,000 stairs (I don’t think I am exaggerating) to the lower park area, then boarded the log flume that slides under the King-Kong sized entrance — long-time Jurassic Park fans will get the reference. (Can you name the quote in question?)

The ride is still a good one…but it, like the original Jurassic Park movie, has aged. The movie, happily, still wears well. We get goosebumps when seeing dinosaurs the first time, fear levels rising when we watch the unseen Velociraptors feed, blowing to full-on fear in that stainless steel kitchen scene.

[pullquote position=”right”]When the T-Rex bellows in the erstwhile visitor center, draped in the banner announcing “When Dinosaurs Ruled the Earth,” I’m one happy human.[/pullquote]

The ride didn’t fare so well. It seems that several animatronic (“auto-erotic”, anyone?) sauropods forgot how to move. The ride gets bumpy a few times, is a big loud cacophonony, seems a lot shorter than I remembered…and the effect of the chasing T-Rex sticking her head into the waterfall is now rendered campy, instead of scary. It was a jump scare at first, but now I expect it, and Rexie’s looking aged. The best part of the ride is still the crazy long flume drop that seems to go a few more seconds than anyone expects. That’s the best and most obvious thrill.

[pullquote position=”right”]The last thrill is the most subtle. As the flume logs start backing up at the end, we’re in the diddling around in the Diloposaur Paddock. That’s the poisonous fringed lizard who wouldn’t chase a stick, who decided Nedry looked more delicious.[/pullquote] Nedry was a walking pie to those guys, and here they are at the end of the ride, with your log at a jammed stand-still…when a poisonous Dilopsaurus spits RIGHT AT YOU, with that rattling sound.

It’s fun and menacing, and there’s a perfect Easter Egg for fans, right under the low canopy of ferns. It looks at first like someone tossed some garbage at the ride, but JP fans will be rewarded: it’s that can of Barbasol Shaving Cream, the one full of stolen embryos. Very cool, and if you’re not looking for it, you’ll miss it.

My friends, this is world building. Adding the soaring John Williams sound track over it all, you are transported a little away from your cares. The ride clearly needs refurbishment, but with a second Jurassic World movie out this week, making 5 movies in the entire franchise, I’ll bet Universal will “spare no expense” to give the Jurassic Park/World ride its due. I bet Chris Pratt will even reprise his role in it, like he did for the awesome Guardians of the Galaxy Ride at Disney. Jeff Goldblum would be welcome too.

NOTE: The previous time I went to Universal, decades ago, I was lucky enough to walk through with an employee, and she let me run amuck in the lodge/gas station setting where they filmed The Lost World, reprised in Jurassic World. I pretended to be a raptor and chased my friend…and sadly, this was a long way before smart phones and so I don’t have photos. Also, this area of the park burned down. In the words of Dr. Ian Malcom, “So, so there it is.”

This article is brought to you by John Williams. Actually via Amazon’s Alexa, playing Williams. I’m sitting here penning the ride review while listening to this iconic  score. Here’s a link to the soundtrack, and the teeshirt to wear on the ride and at the Jurassic movies! Show your Geek cred!