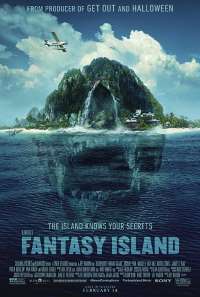 Fantasy Island started off slow and became a fairly solid movie towards the last half. Early on I wasn’t bonding with the characters —  it felt forced and really fake at first glance. But then they stepped up the game.

Once we were thoroughly into the story, and we’d learned a thing or two about the characters, it got much better. (A little over half-way.) They threw a few twists out and I started paying a little more attention. Then they went and threw another curve ball, and they had me. I had to know what was going to happen because I thought I already had it figured out.

The acting was all fairly even across the board; no one fell flat, but no one really shined. It’s a solid rental movie: I can’t endorse the full movie price, but it’s worth the time to watch it at home.


I do have to add that the final scene was most definitely the best scene. That one got a laugh out of me.

About The Peetimes: I have 2 solid Peetimes for you. I did not get any during the last half, due to the fact that the movie has many surprises that are all linked together. If you miss any part of the last half, you’ll struggle to catch up.

There are no extra scenes during, or after, the end credits of Fantasy Island. (What we mean by Anything Extra.)

chevron_left Is there anything extra during the end credits of Fantasy Island?
Movie Review – Truly, Madly, Deeply chevron_right