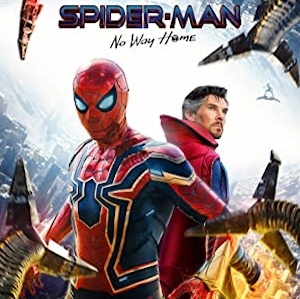 When I read about the multiverse plot for Spider-Man: No Way Home I thought it would either be awesome, or horrible. I was hugely relieved to see that they landed closer to the side of awesome. The writers—Chris McKenna and Erik Sommers—both wrote the previous two Spider-Man movies together, so fortunately No Way Home maintains the playfulness of the previous two.

There isn’t any aspect of this movie that I think could be much improved. The acting and action, pacing and plot: all are as good as could be imagined. Okay, there is one tiny thing that I noticed that they glossed over. I’ll mention that below.


Mild Spoilers Ahead: I’m going to assume you’ve at least seen the trailers and know the general plot of the movie for the rest of this review.

I really wish I had re-watched all of the previous Spider-Man movies, going back to the original Tobey Maguire Spider-Man from 2002. That would have made No Way Home slightly more enjoyable. However, it isn’t crucial. I don’t think I’ve seen any of them since they were originally released, and a few of them I’ve completely forgotten—I barely remember Dr. Curt Connors/The Lizard. Even though all of the villains come back in this movie the writers provide enough context that the story doesn’t fall apart if you’re unfamiliar with the previous iterations. In fact, you could probably follow the plot if you haven’t seen any of the previous Maguire or Garfield Spider-Man movies.

Who would have guessed that you could bond three Spider-Men together and end up with anything resembling a stable element of a story? I had my doubts because I thought it would overly complicate the plot and become too confusing to keep up with what’s going on. But so far so good. No Way Home uses the multiverse to make sense of the previous disjointed versions of Spider-Man. And it appears that the MCU is going all-in with the idea of the multiverse for Phase-4 of the Marvel Cinematic Universe—MCU. The Disney+ show What If… explored the multiverse to grand effect—you must watch it if you haven’t already. Then Spider-Man: No Way Home, and obviously the upcoming Dr. Strange and the Multiverse of Madness (May 6th, 2022) will be all about the multiverse.

I’m sure other people, especially those who know the previous Spider-Man movies well, have spotted other inconsistencies, but one that stood out to me during the movie is: how did Peter and friends get the “visitors” out of their cells and back to Happy’s condo? The visitors were locked up in cells protected by a spell from Dr. Strange. It isn’t like there was a door they could unlock. And we know from Avengers: Endgame that it’s next to impossible to break someone’s spell, even if they’re dead. In a way, this is a complement to the writers. If this is the most obvious pothole in the movie then they did a fantastic job, because often it’s the main plot that has plotholes that sink the movie. Basically, every DC movie ever made.

Where do we go from here?

This could be the end of Tom Holland’s run as Spider-Man. The end of the movie leaves it… Undecided. But Tom Holland said in an interview that he thinks maybe it’s time for him to step aside and let another young actor take the reigns. And he promoted the idea of a female or black Spider-Man in the next iteration. Or, how about both?

About The Peetimes: I wish I had more Peetimes, but there’s an hour-long period in the middle of the movie that is a Peetime desert. Trust me. I’ve got 2 early Peetimes, and then 1 Peetime right before the climactic action at the end of the movie begins. There isn’t another span long enough to use as a Peetime.

There are extra scenes during, or after, the end credits of Spider-Man: No Way Home. (What we mean by Anything Extra.)

Plot
For the first time in the cinematic history of Spider-Man, our friendly neighborhood hero is unmasked and no longer able to separate his normal life from the high-stakes of being a Super Hero. When he asks for help from Doctor Strange, the stakes become even more dangerous, forcing him to discover what it truly means to be Spider-Man

chevron_left Christmas Classic Rewatch Review – Scrooge (1951)
Is there anything extra during the end credits of Spider-Man: No Way Home? chevron_right