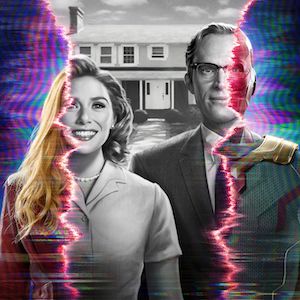 And here we go with the MCU’s dive into television. Incidentally, should it still be the MCU? Or should it now be the MCTVU? I guess that’s one of those questions which doesn’t require looking at too closely.

Anyway, WandaVision is the first TV series from Marvel Studios and, also, the introduction to Phase Four, which started after the completion of the first three phases known as the Infinity Saga. Having said that, it’s not like there was a distinct line drawn between the first three phases and the fourth. For instance, Spider-Man: Far From Home set up a cliffhanger at the end of Phase Three which won’t be addressed until Spider-Man: No Way Home in Phase Four.


Filmed Before A Live Studio Audience

Similar story threads are dangling for Black Panther, Ant-Man, Thor, and Guardians Of The Galaxy.

To be honest, they could have gone home after Avengers: Endgame, and no-one would have complained or felt shortchanged.  The earlier story arcs, particularly with Captain America and Iron Man, had very satisfying, if a bit tear-jerky, resolutions, after which they could have said “thank you and good night” — and we would all have started looking for the next big thing.

As it happens, the next big thing turned out to be Phase Four and, while we waited for the first film outing of 2021 (Black Widow), they decided to launch a Disney+ TV series.

The usual thinking behind taking cinematic characters in a TV series is to give them more time; six half-hour episodes lead to around three hours, about two and a half hours after you take away all the opening titles and end credits.

But that went out the window when Avengers: Endgame was a shade over three hours.

So the first series was filmed and, behold! There’s The Falcon And The Winter Soldier ready to roll. Unfortunately, due to the pandemic, the final bit of filming was delayed and, instead of being released in August 2020 it was put back to March 2021, and WandaVision became the first one to hit the screens in January 2021.

There had to be some minor changes to the end of WandaVision due to distancing measures; apparently, there was supposed to be a scene where one of the characters was swarmed over by the townsfolk but, instead, they had to keep their distance.

Anyway, all that is ancient history now and we have a TV series to look at. If you haven’t seen it then, be warned, spoilers abound henceforth.

I’ll admit that the first viewing of the first episode was, for me, a disappointment. Maybe that’s because my experience of American TV in the sixties was limited to The Dick Van Dyke Show, a bit of Lucille Ball, some Bonanza, and the occasional Phil Silvers Show.  Over here it was just two channels, and they showed Coronation Street, The Good Old Days, Muffin The Mule, The Woodentops, and All Our Yesterdays.

As a result, all of the (undoubtedly) funny gags fell flat for me. They may well have been paying tribute to stand-out scenes from a gentler era.

We Interrupt This Program

It just seemed to me, to be a collection of tired old tropes; hubby works in an office (I was in my thirties before I knew what actually happened in offices), husband can expect wife to whip up a five course gourmet meal because the boss wants to come round, nosy neighbours, forgetting anniversaries, and mother in law jokes. To be honest those were fairly standard tropes on UK TV during the sixties and seventies too but, just because they weren’t totally alien to me, that didn’t mean I was looking forward to seeing it as a new wave of entertainment. Also it was in black and white but that sort of thing doesn’t bother me.

On A Very Special Episode…

What did bother me was that I didn’t know which direction the series was going to go. I didn’t think that the faux sixties comedy show was going to be strong enough to make the whole series palatable to international tastes. I have to admit I was very close to not bothering with the second episode, right up until the last few seconds before the end credits started.

Quite simply, it’s something along the same lines of S.H.I.E.L.D., as if you hadn’t already guessed.

So I was caught and brought back for the second episode. This one smacked of Bewitched, which I did remember; I was quite smitten by Samantha back then.

So the humour was still quite high, but the “what is actually happening” bits started to come more to the fore and took up more of each episode. And, damn, it is bleak!

The first few episodes are meant to be funny and they do, more or less, pull that off. There are amusing adverts for things like the Stark Industries ToastMate 2000 toaster oven, a Strücker watch, and Hydra bath powder. Even these get darker though; stuff like Lagos paper towels “for when you really need to clean up that mess” or Nexus antidepressants. [Ed note: the Yo Magic Yogurt commercial will damage your calm.]

There are nice touches like the episodes being named after TV terms: Filmed Before A Live Studio Audience, Don’t Touch That Dial, Now In Color, We Interrupt This Program, and suchlike. Throw in all the easter eggs — you’d need to have studied every magazine, TV programme, and film in order to get them all — and WandaVision ends up as one of those series that merits several rewatches.

There doesn’t appear to be any signs of a second season but I’m optimistic for a spin-off around Agnes (Kathryn Hahn). Wanda (Elizabeth Olsen) may be appearing in Doctor Strange And The Multiverse Of Madness. Whether we’ll ever see Vision (Paul Bettany) again remains to be seen.

So, was WandaVision perfect?

That’s always an impossible call to make as everyone has different tastes and, while I might have enjoyed it, another person may have hated every minute. It was most definitely a rollercoaster of a ride, though it would have to be a rollercoaster heading into a very deep, dark place.

My biggest complaint is about the “dead” time; recaps, studio idents, end credits, etc. The episodes range from a shade under half an hour to just under fifty minutes, which gives a total of five hours, forty-six minutes, and seven seconds if you were to watch from start to end.

And of course, we’ll watch through it all! The MCU has trained us to sit until the very end of the credits.

Unfortunately, this is a TV show made with cinematic production values. And that means the end credits averaged about eight minutes each episode. I’m genuinely interested as to why absolutely everyone has to be name-checked after the film. I mean, when I buy a bar of soap I don’t expect a small book listing everybody on the assembly line, the people who designed the packaging, and the canteen staff! Still…we’ve come a long way since the days when the end credits were a card saying “The End” or “Fin” (if you were in an arthouse cinema) but there are over an hour and a quarter of credits, etc. spread across the nine episodes of WandaVision.

At least, at home, you can fast forward through them!