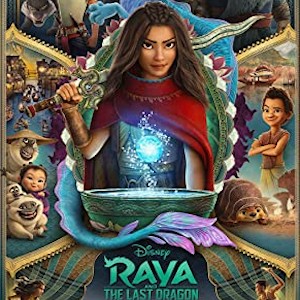 Where’s the A++ button on this thing?? Raya and the Last Dragon is by far my favorite Disney film ever!! I loved it so much that me and my granddaughter stood up and clapped. There was a standing ovation in our theater.

During the credits you’re shown that it took 400 people to make this film. Here’s the kicker: they did it all from home. Everything. From home. Maybe keep doing it that way, because the result was amazing.


I have to take a moment and talk about a stupendous actress. She’s coming up in the ranks and I seriously hope this performance gains her the credit she deserves. I’m talking about the one and only Awkwafina. She is awesome. She voices Sisu, the last dragon. Oh my, the moment she appeared on the screen I knew she was gonna rock it. I just love her.

So far I’ve covered the acting — well technically the voicing since it’s animated — but now I want to address the story. They did a wonderful job interjecting all the negativity that’s in the world right now and formed a lesson around it. I feel that this movie can be used as a cheat guide in how to be a good human. Our government should be required to watch this movie so they can see what the right thing to do is.

It’s a great movie; I strongly urge all parents to take their little ones and be entertained and educated at the same time.

About The Peetimes: We’ve got 2 solid Peetimes you can use, but I’ll warn you…try to hold it. It’s worth it.

There are no extra scenes during, or after, the end credits of Raya and the Last Dragon. (What we mean by Anything Extra.)