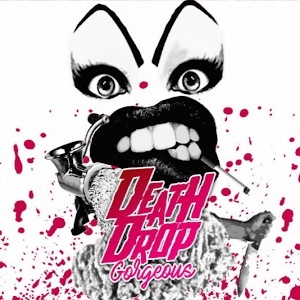 I know that low budget, by definition, means that corners have to be cut. Sometimes that adds to the fun of things! I mean would Kevin Smith’s debut feature, Clerks, have been as much fun if there wasn’t the running joke of the shutters being stuck down when they were down because the only time he could shoot in the shop was when it was closed?  Death Drop Gorgeous was made for the staggeringly small amount of $20,000, Clerks cost $27,575 and that was back in 1994.

How was Death Drop Gorgeous turned in for such a small amount?


Throw in that the cast were mostly new to acting (the totally unique Linnea Quigley being the exception) and filming took place over eighteen months worth of weekends and you can see where a lot of the savings were made.

Do You Get What You Pay For?

It has to be said that Death Drop Gorgeous quite simply screams “budget” pretty much from start to finish.

The acting, in the main, isn’t brilliant but tended to fall into two groups; the ones who couldn’t act but gave it a shot, and the ones who weren’t acting, just playing themselves.

The actors who were playing drag queens were spectacular! I’ve not kept up with the drag scene since Danny La Rue passed, but they all looked awesome to me. Tragedi (Complete Destruction) was mesmerizing and should have been used a lot more!

While none of the cast will be worrying about their Oscar acceptance speeches for Death Drop Gorgeous, there did seem to be a lot of good humour on display; it seemed to me that everybody was having a whale of a time. I guess if there’s not a lot of money on offer, then having a good laugh with the rest of the cast and crew while you dream of stardom must be a great compensation.

And Where Did It Go Wrong?

To my mind, there was one main thing missing from Death Drop Gorgeous as a comedy/horror film and that was the comedy. There may well have been some in-jokes that passed me by, or it may just not be the sort of thing that tickles my funny bone. Either way, there wasn’t much in the way of humour for me.

So that just leaves the horror.

Sadly, again, Death Drop Gorgeous didn’t quite hit the mark. It’s being promoted as a vampire film, but it plays fast and loose with the genre. There were buckets of blood being splashed around like a pub urinal at closing time… with more enthusiasm than accuracy. I’m no expert but even I could see how most of the effects were carried out.

So is Death Drop Gorgeous a total waste of time? To be honest, probably not. It just needs to find its target audience, it just so happens that I’m not part of that particular cohort.  I’m way too old and stodgy to fully appreciate Death Drop Gorgeous, but then I’m not the only cinema-goer out there! Check out the trailer and decide for yourself.