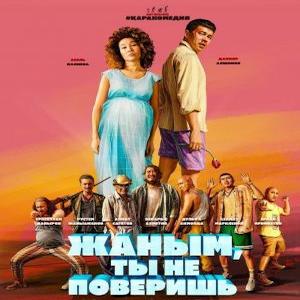 When I think of foreign films, I tend to think of either European or Oriental. For Europe it used to be mainly French or Italian but recently I’ve been watching more Danish films thanks to my Mads Mikkelsen obsession. The Far East was mainly Kurosawa or Kung Fu films but Korea has started making a lot of waves recently.

It felt quite unusual when I film from somewhere in-between was sent my way. I’ll be honest and say that, as far as I can remember, I never seen a Kazakh film. When I got the notification that Sweetie, You Won’t Believe It or Жаным, ты не поверишь! was getting a UK release I thought “Well, this should be interesting!”


It’s described as being “berserk, bloody hilarious and not for the faint hearted” and “Three Stooges-style silent slapstick but…with a lot more gore”. I have to admit that, for me, that description can start alarm bells ringing and not because of any prejudices of Kazakhstani cinema.

There’s A Fine Line Between Fishing And Standing On The Shore Like An Idiot.

I suppose there’s always the problem of different cultural norms meaning that what is seen as hilariously funny in one country doesn’t raise so much as a smile in another. But, as I mentioned earlier, I know nothing of what passes for funny in Kazakhstan so I’d have to watch and judge for myself.

Far more problematic for me was the “Three Stooges” reference. Not having been brought up in the USA I’ve managed to get to pension age without seeing a Three Stooges film right the way through. Obviously I’m aware of them, I’ve seen clips, but I’ve never seen a full film of theirs. Mind you I can say that same about Harold Lloyd, Fatty Arbuckle, and, even, Charlie Chaplin.

Now, I know that silent, visual, slapstick comedy is supposed to be universal because it doesn’t need translating. Apparently, Mr Bean is more popular than Justin Bieber and has been shown in nearly two hundred countries thanks to using physicality over narrative. It’s a shame Oscar Wilde never tried it.

So what’s Sweetie, You Won’t Believe It all about then? Quite simple, really. Dastan (Daniar Alshinov) and Zhanna (Asel Kaliyeva) are struggling with the usual problems that we all face from time to time. Unfriendly shop assistants, demanding credit companies, and an argumentative spouse. On top of all that Zhanna is very, heavily pregnant and fretting about names.

Dastan is desperate for a break. He gets in touch with his friends, Arman (Azamat Marklenov) and Murat (Yerlan Primbetov), and arranges for them to go fishing. They tootle off into the countryside in a van full of, well, inflatable companions. On the way, there’s an incident with a bottle of pee and another car.

The other car turns out to be occupied by a group of gangsters who are taking a guy out into the countryside to administer their particular brand of justice.  Following the car/pee interface there is the entry of Tarzan (Dulyga Akmolda) who seeks revenge for…you’ll have to watch it and see!

Nothing Makes A Fish Bigger Than Almost Being Caught.

So…is it funny? At times, yes. I don’t think it’s the sort of funny that you’ll smile fondly about and come back to at a later date but there are some laugh out loud moments. The other thing about Sweetie, You Won’t Believe It that is mentioned a lot in the publicity materials is gore.

There are some clever and convincing horror type effects, most often perpetrated by Tarzan. They seem to have gone for quality rather than quantity. I don’t know what the budget was but convincing effects don’t come cheap and they are effective effects.

Is Sweetie, You Won’t Believe It perfect? No, but the problems are minor. There are occasional spelling and grammar errors in the subtitles but not enough so that you lose track of what’s going on. What is more problematic is that there are times when the characters talk a lot and very quickly. I’m a fairly rapid reader but there were times when I couldn’t keep up.

The other problem is that, from memory, everything is written in Cyrillic. While the character names are available through IMDb you can’t help but wonder if you’re missing something when the camera lingers on signage and graffiti that doesn’t get translated. Still, there’s plenty of other stuff going on to make it worth watching.