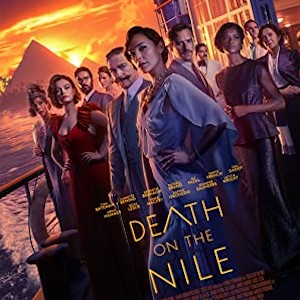 Really disappointing, especially as I liked Kenneth Branagh’s Murder on the Orient Express (2017) so very much. As in Orient, Death on the Nile is fabulously scenic and lush, with a great cast that seems to be trying to make a better movie out of this.

Maybe at two hours and seven minutes, the movie is just too long for what needed to happen. It’s not a long murder mystery in the first place. The Hercule Poirot character, granted, is a huge talker, but everything became so long-winded this time out, and not in the charming way encountered in Orient. Well, not mostly. Death on the Nile isn’t a bad movie; it’s just not quite good.


Recommendation: If you’re serious about not being spoiled by the mystery’s ending, certainly see this now. The sophisticated steamboat setting alone is pretty amazing, not to mention…well…it’s like a trip to Egypt. But really: if you haven’t been spoiled by the original Agatha Christie novel (1937) or the previous Nile movie (1978), then you might be safe.

About The Peetimes: Update: I’ve got 3 Peetimes up, nicely spaced. This is a long movie with tons of talking/possible clues. The main character is a huge talker, as fans of Hercule Poirot know. Try to use the first 2 Peetimes.

There are no extra scenes during, or after, the end credits of Death on the Nile. (What we mean by Anything Extra.)

Plot
Belgian sleuth Hercule Poirot’s vacation aboard a glamorous river steamer turns into a terrifying search for a murderer when a picture-perfect couple’s idyllic honeymoon is tragically cut short. Set against an epic landscape of sweeping Egyptian desert vistas and the majestic Giza pyramids, this tale of unbridled passion and incapacitating jealousy features a cosmopolitan group of impeccably dressed travelers, and enough wicked twists and turns to leave audiences guessing until the final, shocking denouement.

chevron_left Is there anything extra during the end credits of Marry Me?
Indie Movie Review – Sweetie, You Won’t Believe It/Жаным, ты не поверишь! (2020) chevron_right